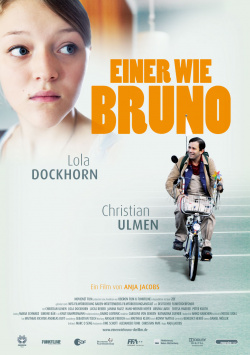 Gladly, 13-year-old Radost (Lola Dockhorn) would be a normal teenager. But that is not possible, because the girl must take care of her mentally disabled father Bruno (Christian Ulmen). Over the years, the two have developed into a well-rehearsed team who, with a few tricks, always manage to convince the Youth Welfare Office that Bruno is a good and responsible father to his daughter. But with the onset of puberty, several problems between Radost and her father become apparent. More and more often the girl wants space, wants to meet friends and experience her first love. Bruno, on the other hand, can't understand this. For him, everyday life always remains the same - and he is happy with it. Change scares him. And his greatest fear is that of losing his Radost. But when she falls in love with her new classmate Benny (Lucas Reiber), the unusual father-daughter relationship threatens to finally break apart...

With One Like Bruno, director Anja Jacobs ventures into a courageous undertaking. Because it is always a difficult balancing act to tell serious topics with a certain lightness. Moreover, it was also a daring decision to have the role of Bruno played by Christian Ulmen, who is better known for humorous roles. For in this way, there was a definite danger that the character Bruno would be robbed of his necessary depth of character and would only be seen as a purely comedic figure. But in this respect the all-clear can be given. Jacobs' sensitive direction and Ulmen's acting, which strives for credibility, prevent One Like Bruno from degenerating into an overblown bit of claptrap.

However, no matter how hard Christian Ulmen tries to embody his character in a credible and authentic way, his Bruno just seems too obviously acted in the end. No question, the actor does his job really well and reveals a lot of talent. But he doesn't completely succeed in making Christian Ulmen disappear behind Bruno. What he manages to do perfectly with his numerous artificial characters, seems a bit too much effort here to be convincing.

In contrast, Lola Dockhorn is completely convincing. She gives an extremely powerful and absolutely convincing performance as the girl who has to grow up far too early and forgoes her own youth out of love for her father. Dockhorn's performance carries the film over long stretches and makes it worth watching even in the weaker moments.

With a lot of humor, a good portion of believable drama and with a production that has its heart in the right place, Einer wie Bruno has become a nice little tragicomedy that does not necessarily have to be seen on the big screen, since the ZDF co-production still has a rather clear TV character. Thanks to the good actors and the touching story, the whole thing can be recommended to lovers of humorous dramas from Germany, despite small dramaturgical and staging weaknesses.