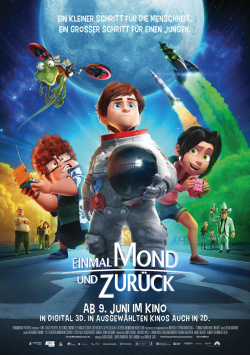 Once on the Moon and Back

12-year-old Mike Goldwing is desperate: all his attempts to get his father and grandfather to talk to each other again have failed. But now the perfect opportunity presents itself to finally settle the dispute between the two stubborn astronauts. For when eccentric millionaire Carlson announces his intention to fly to the moon to prove that the first lunar landing was just a fake, the men are selected for a hastily convened lunar mission. And at last, a Goldwing could fly into space. But during the preparations, an accident occurs that ruins all progress between the feuding men and finally destroys the dream of going to the moon for this family. But Mike is not willing to accept this. Together with his best friends Amy and Marty, he hatches a plan to save the mission and stop Carson.

Following the success of Tad Stone's - The Lost Treasure Hunter, director Enrique Gato now gets to deliver Once Upon a Time in the Moon, the first Spanish animated film to be distributed worldwide by a Hollywood studio. The film is not necessarily a masterpiece of originality. At times, Gato has been very brazen in stealing from other films. For example, Mike's little sister is almost a 1:1 copy of little Agnes from I - Simply Incorrigible. And also a legendary episode of The Simpsons, in which Homer is allowed to fly into space, is very obviously quoted here. But since these are probably more criticisms that only older animated film fans will be bothered by, the question is whether Once Upon a Moon and Back can satisfy its young target audience.

And here the answer has to be a resounding yes. The film is an entertaining adventure with plenty of kid-friendly humor, some well-done moments of suspense, and lovable characters. Especially the lizard Igor, the faithful companion of Mike's buddy Marty, children should quickly take to their hearts. Since Igor is repeatedly used as a test object for Marty's not always functional inventions, the somewhat clumsy lizard also provides the best laughs in the film. These are especially important when things get a little too exciting for very young moviegoers, which can be the case in two or three scenes. Then Igor's antics and other humorous interludes have a very relaxing effect and skillfully prevent the too much tension for tears or even leaving the cinema prematurely.

Although I rolled my eyes many a time as an adult and could really anticipate every twist and turn, I also quickly realized that I would have loved Once Upon a Time to the Moon and Back as a little boy. Even though, unlike some other animated films, this one really only appeals to and entertains children and not so much the accompanying adults, this fast-paced space adventure as a children's film can still be attested a clear worth seeing!

Cinema trailer for the movie "Once on the Moon and Back (Spanien 2015)"
Loading the player ...