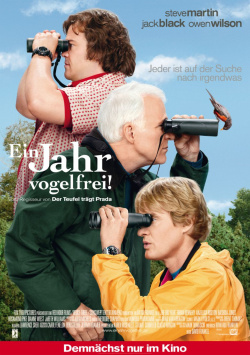 Really, there's not much that makes Brad Harris' (Jack Black) life worth living. He's single, chronically broke and his job doesn't fill him with any real joy either. Only his passion of bird watching makes Brad really happy. And that's why his greatest wish is to be the most successful birdwatcher in the world just once. To achieve this, he would have to complete a so-called Big Year, in which participants have to observe as many birds as possible in the course of a year in all the states of the USA. That takes time and money - and although Brad doesn't have enough of either, this year he dares to challenge multiple champion Kenny Bostick (Owen Wilson) for his title. Too bad Bostick is also competing again this year. However, with the help of businessman Stu Preissler (Steve Martin), who wants to take his Big Year into well-deserved retirement, Brad may well stand a chance against record holder Kenny. But the latter, of course, is doing everything he can to remain number one...

Following his box-office successes The Devil Wears Prada and Marly & I, director David Frankel presents a new comedy, A Year Outlawed!, which promises a lot of slapstick and non-stop comedy with names like Jack Black, Owen Wilson and Steve Martin and its somewhat unfortunate cut trailer. But the film, inspired by a non-fiction book, then offers the audience a very different kind of comedy, with which probably just fans of Jack Black can only conditionally befriend.

While it is at all amazing that the subject of birdwatching yet quite a lot of comedy and a pleasantly high entertainment value could be elicited. But the humor remains altogether very restrained and animates rather to the pleasant smirk, than to the hearty laughter. Since the story remains rather unspectacular and doesn't offer much more than watching a couple of bird enthusiasts hunting for as many different bird species as possible, the film draws its charm and wit primarily from the good interplay between the actors and their lovingly drawn characters. It's kind of fun to follow Brad and Stu as they try to knock Kenny off his throne. Well, it's not quite understandable what the fascination for birds might be, that they even risk their relationship with a woman like Rosamund Pike. But as the plot progresses, you as a viewer just get infected by Brad's enthusiasm and even feel something like excitement as things head into the home stretch.

In addition to the very good cast, which includes small appearances by a wonderful Anjelica Huston as a rough-around-the-edges ship captain, Brian Dennehy as Brad's father or Jim Parsons, known as Sheldon Cooper in the series Big Bang Theory, the partly extremely picturesque landscape of North America also plays a major role in the likeable film. The film's 270 scenes were shot in just 55 days at over one hundred locations. That the film exudes so much calm despite the extremely hectic shooting schedule is quite a feat.

A Year Outlawed! is at times amusing, then again very quiet and downright thoughtful, at times reveling in its beautiful imagery, then again trying a bit clumsily at crowd-pleasing slapstick humor. The end result is a nice, harmless, yet somehow charming film that may disappoint expectations of gag fireworks, but as a small comedy of a very special male friendship it offers very good entertainment. Worth seeing