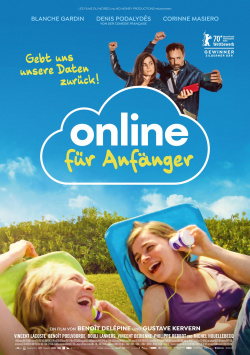 Marie (Blanche Gardin) has a problem: Not only does she have to flog her furniture on the Internet to make ends meet. Now she's being blackmailed with an embarrassing sex tape. Bertrand (Denis Podalydès) isn't faring much better: his daughter has been the victim of cyber-bullying, while he himself has fallen in love with the voice of a call centre agent on the other side of the world. And then there's Uber driver Christine (Corinne Masiero), who despairs of bad reviews and battles her serial addiction. The three are tired of their lives being so dominated by social media and internet corporations, so together they declare war on the tech giants....

Benoît Delépine and Gustave Kervern ("Mammuth", "The Day Will Come") amusingly tackle the pitfalls of the digital world in "Online for Beginners". With a quirky lightness, they address topics that usually have very unpleasant consequences for those affected. They don't make fun of cyber-bullying or exposing oneself on the net through sex tapes, but rather of the actions - or rather the inaction - of large Internet companies. Their not infrequently dubious actions are exposed here with witty bite, whereby one as a viewer often gets the laughter stuck in the throat.

The film shows well how much we benefit from the advantages of digital connectivity, but also how easily we fall into its traps, from which there is then hardly an escape. Because as the saying goes: the internet never forgets! There are some really brilliant moments here and also very funny scenes. Nevertheless, you always have the feeling that the whole thing could have been a bit more evil and biting. Because too often the plot just ripples along, which is not exactly conducive to the entertainment value in view of the somewhat unwieldy production.

"Online für Anfänger" has many very strong moments, through which you also critically question his own actions on the net. Nevertheless, much more could have been made out of the material. In the end, it simply lacks that special something that gives the story the explosiveness that is actually inherent in the subject. Nevertheless: If you like French comedies of the more bizarre kind and have ever despaired of Netflix, Google, Facebook & Co, this film can be recommended. Worth seeing!

Cinema trailer for the movie "Online for Beginners (Frankreich 2020)"
Loading the player ...