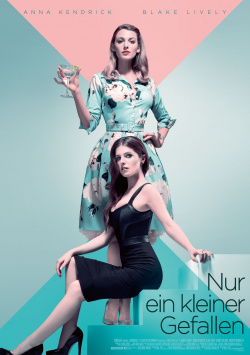 Single mom Stephanie (Anna Kendrick) really does everything she can to be a good mother: she takes on all kinds of tasks at school events, shares her experiences in a mommy blog and sacrificially takes care of her son. But socializing comes up short, so Stephanie is also a little blindsided when flamboyant fashion PR executive Emily (Blake Lively), of all people, invites her out for a drink. Between the two completely dissimilar women actually develops something like a friendship and therefore Stephanie does not hesitate long when she asks Emily one day for the small favor to pick up her son Nicky from school. But Emily doesn't show up that day to take Nicky home. And she remains missing for the next few days as well. Stephanie helps Nicky and Emily's husband Sean (Henry Golding) get through the uncertainty as best she can. But where is Emily? And what happened to her?

After sometimes rather crude comedies such as Bride Alarm, Tough Girls and the controversial Ghostbusters reboot, director Paul Feig shows a slightly different side to his skills with Just a Small Favour. The film adaptation of Darcey Bell's novel is a twisty thriller with delightfully satirical elements, in which a suburban idyll is disenchanted and helicopter parents and the fashion industry are taken to task. The pleasant thing about it is that Feig foregoes his typical punch-up humor and rather goes to the point. Wonderfully cynical dialogue and slightly exaggerated characters make this one hell of a fun film.

Anna Kendrick is perfectly cast as uber-mom and mommy blogger. But as good as she plays, the star of the film is Blake Lively, even if she's seen relatively briefly compared to Kendrick. As an uninhibitedly honest PR executive with a penchant for high jinks and an extremely sharp tongue, the Gossip Girl is a real revelation. So then the scenes where the completely different worlds of Stephanie and Emily collide are the big highlights of this entertaining thriller.

How the story and especially Stephanie develop feels a bit contrived, as does the actual resolution. And yes, there are a few inconsistencies as well. But that doesn't change much about the very high entertainment value of the film, which not only has a lot of mischievous wit to offer, but also a tiny bit of suspense. So you can really confidently say: Do yourself a little favor and buy a ticket for this movie. If you like American suburban satire and appreciate light Hollywood entertainment with bite, this is the movie for you. Absolutely worth seeing