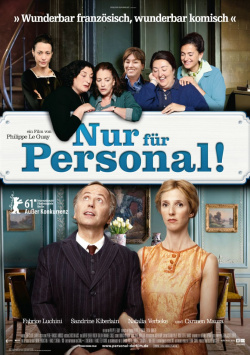 Stockbroker Jean-Louis Joubert (Fabrice Luchini), who lives in a smart city apartment with his wife Suzanne (Sandrine Kiberlain) in 1960s Paris, can't really complain about his life. But when it comes to his breakfast egg, he can't take a joke. After his maid Germaine has to listen to his grumblings morning after morning because she can't manage a perfect three-and-a-half-minute egg and Suzanne then also wants to turn her recently deceased mother-in-law's room into her own kingdom, Germaine has had enough. She quits and packs her bags. In her place, the young Spaniard Maria (Natalia Verbeke) takes over the family household. Jean-Louis is taken not only by her perfect preparation of his breakfast ice cream, but also by her refreshing, life-affirming manner. A friendship of sorts develops between the two, giving the stockbroker access to a world that was completely foreign to him. He gets to know the life of the mainly Spanish maids who live in less than pleasant circumstances on the sixth floor of the house. He spends more and more time with the staff, improving their living situation and thus incurring Suzanne's wrath - with unexpected consequences.

With Only for Staff, director Philippe Le Guay has crafted an endearing comedy that blends obvious comedy with gentle satire, understated drama, and sweet romance into an atmospheric whole. Even the first few minutes, introducing the two completely different worlds of the wealthy bourgeoisie on one side and the Spanish maids on the other, are full of many wonderful moments. Although they live in the same house and are separated by only a few flights of stairs, these lives could not be more different. For while Jean-Louis' biggest problem is the consistency of the yolk in his breakfast ice cream, the women on the 6th floor have to deal with cold water and a constantly clogged toilet.

Fabrice Luchini (The Girl from Monaco, The Jewel) is simply wonderful as a stiff stockbroker. How he thaws out more and more in the presence of Maria, enchantingly embodied by Natalia Verbeke, and discovers whole new sides of life while looking outside the box, Luchini plays so sympathetically and endearingly that it's all too understandable why the women from the 6th floor take him to their hearts in such a way after initial doubts. But Sandrine Kiberlain (Little Nick) is also completely convincing in the rather thankless role of the brittle Suzanne. Especially when Suzanne tries to keep her composure even in moments of the greatest social embarrassment, but the pain and disappointment can be seen in her facial expressions, it becomes clear that Kiberlain really is the ideal casting for this role.

But the heart of this warm comedy is the wonderful ensemble of Spanish actresses, which include Natalie Verbeke, Lola Duenas (Me Too) and Carmen Maura (Volver). Although their wealthy employers, as well as the entire neighbourhood, often hostile them and regard them as social scum, these women have retained their joie de vivre, their dignity and their warm-heartedness. And so then the scenes showing the lives of the women among themselves are filled with endearing moments and charming wit.

Only for Staff admittedly also makes use of a few clichés and perhaps applies a little too thickly at the end. But thanks to the charming actors and the really charming staging this does not fall further negatively into the weight. Because the feeling that this film leaves behind is positive throughout. Who likes French comedies of the particularly hearty kind, should not miss a visit to the women from the 6th floor in any case. Absolutely worth seeing!

Cinema trailer for the movie "Staff Only (Frankreich 2011)"
Loading the player ...