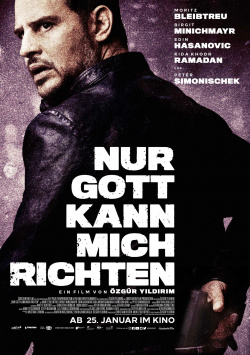 Only God can judge me

Five years in prison are enough for Ricky (Moritz Bleibtreu). After his release, he wants to start all over again. But to fulfill his dream of opening a bar on the island of Cabrera, he desperately needs start-up capital. The hope that his buddy Latif (Kida Khodr Ramadan), for whom he had taken the rap after a failed robbery, can help him out, is quickly dashed. But there would be a possibility: a seemingly foolproof robbery during a drug deal. But trouble soon begins to brew. Latif is arrested shortly before the robbery and Ricky has to ask his brother Rafael (Edin Hasanovic) for help, whom he really didn't want to get involved in any more deals. Then the brothers with the stolen drugs also get into a police check and the situation threatens to escalate. Ricky could still bring the situation back under control, were it not for his brother's unpredictable temper and a young policewoman (Birgit Minichmayr) who, in order to save her daughter's life, develops a criminal energy that could become very dangerous for Ricky, Rafael and Latif.

In his acclaimed debut film Chiko, director Özgür Yildirim had very authentically traced the rise and fall of young drug dealers on Hamburg's Kiez in 2008. With Nur Gott kann mich richten (Only God Can Judge Me), he once again enters the underworld, but this time in Frankfurt. Even though it may seem at first that the gangster film is a kind of thematic continuation of Chiko, it soon becomes clear that Nur Gott kann mich richten is much more. On the one hand, of course, the film lives from its atmosphere, which is created not least by the very well chosen locations. Yildirim does not show the beautiful glossy Frankfurt, but gloomy backyards and shady establishments, which are a harsh contrast to the neat skyline.

In this setting, the story feels very close to reality, despite a few minor clichés. And that makes for a gripping tension that is maintained for almost the entire running time. But what really makes the film worth watching is the multi-layered character sketching. When it comes to the main characters, Yildirim constantly blurs the lines between good and evil, right and wrong. On the one hand, there's the clearly criminal Ricky, who as a viewer you nevertheless take for granted that at least some of his motives are honorable and who you somehow wish would make a fresh start away from the criminal path. On the other hand, there is the policewoman who is driven by a personal fate to do something illegal. Her decisions are wrong and have extremely fatal consequences - but they are understandable. And this is exactly what gives the story a credibility that is primarily responsible for the positive overall impression in the end.

Yildirim has hired a really great ensemble for the gangster drama. Even though Moritz Bleibtreu is the real leading man, there is enough room for the other actors and actresses to unfold and develop their characters. A good example of this is Franziska Wulf, who plays Rafael's fiancée Elena. In itself, her character is a classic cliché role. But script, direction and acting make sure that she can free herself from the genre-typical black and white painting and show very rousing facets. And that's actually true for almost all of the characters.

Only God Can Judge Me has a few minor lengths and is of course not entirely free of clichés. But overall, the film has become a really very good gangster film with a relentless finale, of whose class there could be more in Germany gladly. Absolutely worth seeing

Cinema trailer for the movie "Only God can judge me (Deutschland 2017)"
Loading the player ...