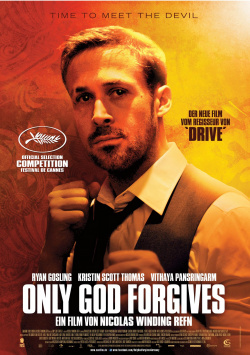 Julian (Ryan Gosling) lives with his brother Billy (Tom Burke) in the middle of Bangkok's red light district. Thanks to illegal deals they organize from their kickboxing club, the mismatched brothers are able to enjoy a life of luxury, sex and sin while their mother Crystal (Kristin Scott Thomas) pulls the strings from a safe distance. When Billy brutally murders a prostitute while intoxicated, a retired cop (Vithaya Pansringarm) sticks to his heels as a self-proclaimed avenging angel and makes Billy pay for the murder with his life. The death of her son puts Crystal on the spot. She travels to Bangkok to find out who killed her Billy. Now it's up to Julian to exact retribution for his brother. But the battle against the taciturn avenging angel soon threatens to escalate and the streets of Bangkok's underworld will turn blood red.

Only God Forgives is the second collaboration between Ryan Gosling and Danish filmmaker Nicolas Winding Refn, following the acclaimed Drive. There are some obvious parallels between the two films then, suggesting that they are roughly on the same level in terms of quality. The almost hypnotic soundtrack, which was once again composed by Cliff Martinez, a very unique, atmospheric color scheme and an extremely taciturn main character, who fights with an almost stoic facial expression through a story of sometimes very drastic violence. Already in Drive these set pieces have divided the audience. While some saw the film as a true masterpiece, others found it to be a boring, jaded orgy of violence. But it is undeniable that Drive had something very special, something somehow unique, which unfortunately can no longer be said of Only God Forgives.

For not only does Nicolas Winding Refn seem to quote himself over and over again, he also very obviously borrows from the work of other directors. For example, the nameless avenging angel who, when he's not spilling blood, stands in the cone of light of a bar singing karaoke, seems to have come straight out of a David Lynch film. That's supposed to be original, but it's not. In addition, Refn, for all his efforts to provoke with his unconventional staging, loses sight of one thing: the story of his film. The story is only rudimentary and is offered to the viewer only in fragments that cannot always be logically connected with each other.

You may argue as an admirer of the director that Refn doesn't serve everything to the viewer on a silver platter and that you have to look a little below the surface to understand how great the story actually is. And if you read through the interview with the filmmaker in the film's press booklet, you're inclined to agree, given the good ideas he expresses here. But intelligent, challenging ideas and inappropriate staging just aren't enough to make a good movie. Only God Forgives is completely emotionally undercooked, there's barely any tension, and the characters remain largely uninteresting. Only Kristin Scott Thomas as the ice-cold killer-mom provides a few moments worth watching. But even she can't prevent the thriller from trying too hard to be bizarre in the end and thus becoming one thing in the first place: extremely boring. Those who see Refn as one of the greatest geniuses of contemporary cinema will definitely not share this opinion. But even with great admiration for Refn's films like Drive, Valhalla Rising and Pusher, there is only one from me for this work: very conditionally worth seeing!

Cinema trailer for the movie "Only God Forgives (USA/Frankreich/Dänemark 2013)"
Loading the player ...