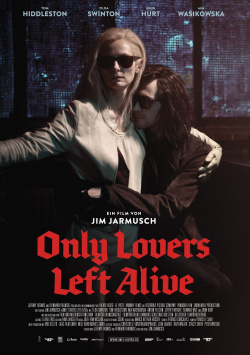 Adam (Tom Hiddleston) is a gifted underground musician, who hides himself completely from the public and has become something of a myth for his fans. But even when he is admired and loved for his talent, Adam cannot reciprocate these feelings. Modern society and its self-destructive, selfish behavior simply make him sick. He wants to put an end to his existence. But that's not so easy, because Adam is a vampire blessed with immortality. When he seems to have found the perfect solution for this obstacle, his great love Eva (Tilda Swinton) suddenly appears, who has felt Adams misfortune thousands of kilometres away in Kasbah of Tangier. She wants to help him defy the downfall of the world he once loved so much. But when Eve's sister Ava (Mia Wasikowska) shows up and disturbs the fragile idyll of the two lovers, any hope for a new courage to live seems lost forever…

With "Only Lovers left Alive" cult director Jim Jarmusch delivers a vampire film of a different kind. The typical bloodsucking clichés are not to be found here. Jarmusch rather uses the immortality of his characters as a symbolization of an idealized past. Their dependence on clean blood, which proves to be very difficult to organize, could be understood as an allegory of the corruption of society. So it is hardly surprising that Adam lives in Detroit of all places, a city that stands like no other for the economic decline of the USA. Where poverty, superficiality and corruption prevail, the vampire is hardly reminded of the good old days. To a time when art still had a meaning, when music could change the world. In a world where apps take over the composing and where everyone can be a star for 15 minutes, even if there is no talent at all, in a world dominated by pleasure-seeking and selfishness, he simply doesn't want to live anymore.

That's as pessimistic as it sounds. Despite a few humorous moments of a morbid nature, the film is permeated by a melancholy that is underscored by the depressed play of Tom Hiddleston and the pale-elegant appearance of Tilda Swinton. The story itself is kept rather simple and doesn't provide much material for a two-hour movie. And so it's no wonder that the individual scenes, despite some outstanding moments, drag on longer than thick blood. The appearances of John Hurt in the best Helge Schneider memory look and a gorgeously over-excited Mia Wasikowska also change a little.

However, productions of the simple, mass-suited kind have never been Jim Jarmusch's kind. He remains true to his quirky, unwieldy style again, whereby he at least opens up a little more to the mainstream than in his last work "The Limits of Control". Of course, this does not mean that "Only Lovers left Alive" is common in any form. But there are single scenes, which you can enjoy even if you can't get along with Jarmusch's work very well.

What's great art for some, is boredom for others. Both opinions have absolute justification for such an unadapted work. The fact that you can't get anything out of this film doesn't necessarily mean that you didn't understand it - an assumption that self-proclaimed cineastes unfortunately make far too often in the discussion about films like this. But no matter if you find an access to this vampire march or not, one thing is indisputable: the visual language and symbolism that Jarmusch uses here is really great and fascinating. The film has a very special atmosphere, which even captures you when you are bored.

Who hasn't been able to do much with Jim Jarmusch's films so far won't become a fan of the filmmaker. His style is simply too special for that. But if you appreciate him and want to see what an inappropriate director like Jarmusch does with the vampire myth, you shouldn't miss "Only Lovers left Alive"!

Cinema trailer for the movie "Only Lovers left Alive (Deutschland/Großbritannien/Frankreich 2013)"
Loading the player ...