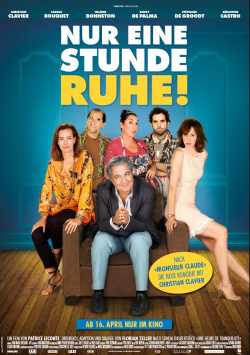 Just one hour of peace!

Michel Leproux (Christian Clavier), a successful dentist and passionate jazz lover, can hardly believe his eyes when he finds a rare record at the flea market that he has been looking for for so long. There's no better way to start a day. Michel has only one wish: he wants to retire to the living room of his apartment and listen to the great sounds of Neil Youart. But it's too bad that the young moonlighting worker Léo (Arnaud Henriet) wants to start remodeling Michel's study today of all days and has to loudly tear down the partition walls to do so. In addition, Michel's wife Carole Bouquet) seems to be completely out of it, his mistress Elsa (Valérie Bonneton) keeps trying to call him, the pushy neighbour Pavel (Stéphane de Groodt) wants to get him interested in today's neighbourhood party and his son Sébastien (Sébastien Castro) also drops by now of all times to make himself comfortable in the salon. The whole world seems to have conspired against Michel - but all he wants is an hour's rest!

Based on the play of the same name by Florian Zeller, Only an Hour's Rest! offers French comedy fare of a very conventional kind. Director Patrice Leconte, who has worked with Christian Clavier on several occasions in the past, does a great job of spotlighting the comedic talents of his leading man. With a pinch of slapstick and many witty exchanges, Leconte gradually deconstructs the seemingly perfect image of the wealthy dentist, who can be seen as the embodiment of the French bourgeoisie. But even though Leconte spices his comedy with some social criticism, touching on the problems of migrants and refugees, any depth of content is obscured by wild gesticulation and frantic chatter.

No question how Michel is driven ever closer to the brink of a nervous breakdown, Christian Clavier's constantly derailing facial expressions make for enjoyable fun. However, this could be marred for some viewers by the fact that the characters are actually all less than likeable and the chaos in Michel's apartment feels overly contrived. Overall, the comedy lacks the charm that made Clavier's last film Monsieur Claude and His Daughters such a success despite similarly turbulent circumstances. Only an hour of peace! has some really funny moments, but at the same time, after 40 minutes at the latest, you also wish that the film title would finally become reality.

If you like French comedy fare of the particularly turbulent kind, you're guaranteed to be well entertained here. But for whom not only chaos, bustle and slapstick make a good comedy, hearty laughter might be replaced by annoyed eye-rolling more often. And that's why there is only with restrictions still a: Worth seeing!

Cinema trailer for the movie "Just one hour of peace! (Frankreich 2014)"
Loading the player ...