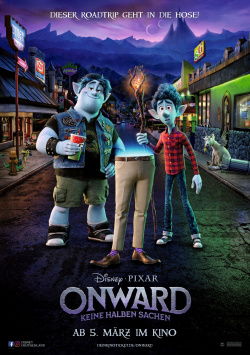 Onward - No Half Measures

Long ago, the world was full of magic and enchantment. Even in New Mushroomton, there is little sign of it today. Instead of spells, people rely on modern technology, unicorns have become nuisances, and dragons are kept as pets. And magic has been completely forgotten. That changes for shy Ian Lightfoot when, on his 6th birthday, he and his brother Barley receive a gift from their late father: a magical wand that will help them bring their dad back to life for 24 hours. Too bad the spell is interrupted before their father's entire body could materialize. The brothers and their dad's legs now have only 24 hours to find a magical stone that they could use to finish the spell. For Ian, who has never met his father, there is no question: he must find this stone. And so the boys embark on an adventurous journey that shows them that their world is still full of magic - magic that can, however, also become very dangerous.

Onward - No Half Measures is the latest work from the house of Pixar. There one may expect a certain quality and originality. And this seems through the first few minutes then actually given. When it is shown how magic has disappeared from a colourful fairy tale world due to certain inventions and how it would look like if elves, unicorns, fairies and other beings would live in a present that is very, very similar to ours, this is not only extremely funny but also bristles with ingenuity. This then shines through again and again as the film progresses, but is increasingly lost in the very conventional story.

No question, the film is thoroughly entertaining. Even as an adult, you can laugh heartily here more than once and enjoy the sometimes very quirky ideas from the team around director Dan Scanlon. But it also becomes clear again and again that this animation adventure lacks that certain something that distinguishes many other works from the house of Pixar. Neither the development of the main characters, nor the twists and turns of the story offer the audience anything surprising. As imaginative as the little details of New Mushroomton and its environs may be, the paths the story walks are well-trodden.

Only in the ending do the creators once again prove why Pixar films are very special family films. For the resolution of both brothers' efforts is more than satisfying - both on a dramatic and emotional level. Here the film makes up for a lot, so that some small weaknesses are already forgotten by the end. Still: The great enthusiasm that films like Alles steht Kopf triggered in me, just doesn't want to happen here. Onward - No Half Measures is one of the best animated films of the last months, but also one of the weaker Pixar films. Nevertheless, there is clearly a: Worth seeing!

Cinema trailer for the movie "Onward - No Half Measures (USA 2020)"
Loading the player ...