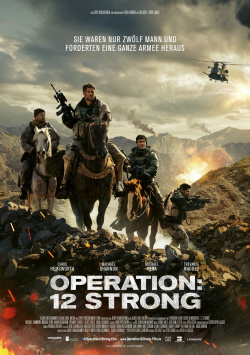 While the entire world was still in a state of shock after the attacks of September 11, 2001, the U.S. government sent a small task force to Afghanistan to carry out an important, but also extremely dangerous mission: Captain Mitch Nelson (Chris Hemsworth) and his eleven Green Berets are to win over the Afghan Northern Alliance in the Hindu Kush mountains for an alliance in the fight against Taliban and al-Qaeda fighters. But not only mutual distrust and cultural differences, but also the numerical superiority of the enemy make the chances of survival for the US soldiers more and more dwindling.

Operation: 12 Strong tells a largely unknown story surrounding the first U.S. deployment after the September 11 attacks. Award-winning photojournalist Nicolai Fuglsig, who makes his feature directorial debut here, unfortunately falls into the usual clichés of Hollywood military films far too often, at times almost unintentionally comical. Certainly: Some sequences are first-class in terms of craftsmanship and dramaturgically rousing. But the overly one-dimensional drawing of the characters, the extremely flat dialogues from the manual for war films (Tell my wife I love her) and the - despite some critical undertones - usual patriotism prevent that in the end a good film has emerged from the individual set pieces.

How closely the whole thing corresponds to actual events, I can't judge. It doesn't really matter, because even with a dramaturgically high level of authenticity, the flaws wouldn't be ironed out. Operation: 12 Strong just doesn't manage to really wrest anything new from the genre. Well, the fact that the soldiers had to go into battle on horses can be seen as extraordinary. But other than that, the whole thing is so conventionally directed and acted that the entire movie becomes extremely interchangeable. There is no scene that somehow stands out and lingers in the memory.

Even such reliable performers as Michael Shannon or Michael Pe&ntilde;a deliver nothing more than solid average here. It's not that Fuglsig's directorial debut is really bad. There are too many positives, especially on a visual level, for that. It's simply that as a viewer here, you constantly feel like you already know the movie and know exactly what the stenciled characters are going to say next. If you like the Hollywood war movies of the past few years, you'll certainly find Operation: 12 Strong gripping and exciting. But if you've had enough of cliché dialogue and the usual patriotism, you'd better buy tickets for another movie at the box office. Only conditionally worth seeing!