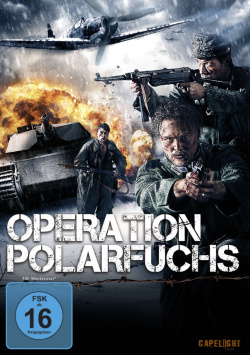 Film: Sweden in 1942: the country is not yet at war. But the invasion of the German Wehrmacht seems to be imminent. Therefore the small unit of Lieutenant Aron Stenström (André Sjöberg), who guards a small outpost in the mountains at the border to Norway, is put on alert and Aron has to put his wedding plans on ice for the time being. At first, everything stays calm. But when two soldiers of the unit, among them Aron's brother Sven (Martin Wallström), are discovered by the Nazis while trying to spy on the enemy, the small excursion ends in a bloody catastrophe. Against the orders of his superiors, Aron and his men set off for Norway to free his brother from Nazi captivity - a rescue operation equivalent to a suicide squad...

Director Richard Holm, who has staged high-quality TV productions such as "Verdict Revised - Unschuldig verurteilt" or "GSI - Spezialeinheit Göteborg" among others, has staged an exciting war thriller with "Operation Polarfuchs", which tries to capture the horror of a great war on the basis of a short story. While the cover of the DVD rather 80's war action like "Geheimcode: Wild geese" suggests, the moments of calmer tension dominate in the film. Only in the last third there are some fights and duels, which Holm staged very effectively, but sometimes also quite bloody.

The most important actor of the film is undoubtedly nature. The snowy landscape of the Swedish mountains and the Norwegian forests, which seems very threatening in its beauty, is captured in atmospheric images that build up an oppressive and threatening basic mood in which the actors can then act convincingly throughout.

Zwar makes use of Holm both in the drawing of the characters and in the plot of several clichés. For example, the head Nazi is a very stenciled villian, who sometimes seems almost involuntarily funny and only conditionally threatening. Also, the subplot around Aron's fiancée isn't necessarily one of the movie's strongest moments. And yet "Operation Polarfuchs" is never boring and offers exciting, captivatingly photographed and solidly staged entertainment on a high level until the relatively open end. Worth seeing!

Picture + sound: The picture, which is mainly kept in cool colors, is very clean, but in some moments it looks a bit soft, which is also noticeable in weaknesses in the overall sharpness. All in all, however, the visual realization of the movie is absolutely perfect in terms of atmosphere. The sound is convincing with its well mixed dialogues and the harmonious ambient noises, here and there some good surround effects also provide a little movement in the action. Gut!

Extras: The DVD offers the interested viewer a Making of (ca. 12 min.) commented by director Richard Holm and main actor/screenwriter/producer André Sjöberg, in which the difficult shooting in icy cold is discussed. In addition there are about 3 minutes of quite amusing outtakes, as well as an alternative opening and closing sequence (about 7 minutes), which can be watched either with the movie sound, or with an audio commentary. These additional scenes originally formed the narrative bracket of the film and played in the present, dissolving the more or less open end of the film. After some test demonstrations the makers decided against this bracket, but it is interesting enough to watch it on the DVD. Gut!

Fazit: "Operation Polar Fox" is a thrilling war thriller that comforts us over smaller lengths and somewhat worn clichés because of its exciting story and the threateningly beautiful snowy landscapes of Sweden and Norway. The DVD is technically well done, the bonus material is scarce, but worth seeing. All this makes this home theater premiere in the end then: quite recommendable!