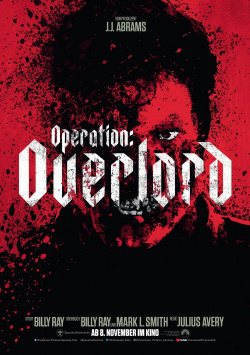 On the eve of D-Day, a small unit of US paratroopers parachutes over a small village in France to carry out an important mission. They are to destroy a radio tower through which the Nazis in Berlin communicate directly with the bunkers on the beach at Normandy. But when young soldier Boyce (Jovan Adepo) makes a gruesome discovery in the cellars of the chateau that houses the radio tower, he convinces his superior Corporal Ford (Wyatt Russell) to destroy not only the tower, but the cellar vault as well. The small squad sets off on a dangerous maneuver, where they find themselves up against an unexpectedly powerful foe.

Operation: Overlord starts off like a very classic war movie. Visually, Julius Avery pulls out all the stops after just a few moments, but also serves up all the usual clichés. The troop around Corporal Ford probably corresponds to all stereotypes, which one knows from other war films. You expect sentences like "Tell my wife that I love her". - You'll fucking tell her yourself. Yes, everything seems very familiar and unsurprising. Even the head Nazi Wafner, played by Dane Pilou Asb&aelig;k (Game of Thrones,Borgen) is a walking pull-off character with slightly over the top attitude. It's all quite exciting and visually engagingly realised. But it's also strictly a formula.

But then the film suddenly changes genre and mutates from a war movie to a monster horror flick with some kind of Nazi zombies. It sounds trashy, but surprisingly it's not. Avery finds a tone that works for long stretches. Admittedly, at times the film feels a bit indecisive, as if it doesn't know whether to tell the story with a certain seriousness or with humor that is not unusual for the genre. And so the viewer also feels a little indecisive at times, whether one should laugh here or whether one is rather dealing with unintentional comedy.

But the high entertainment value is only marginally diminished by this. Granted, Operation: Overlord suggests here and there that it could have been a much better film if Avery had been a little more determined to get things done. But even so, this horror flick still offers enough positive aspects to satisfy genre fans. And for this there is therefore also a deserved: Worth seeing!