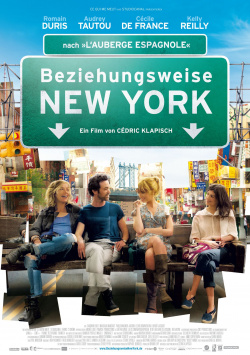 In 2002, Xavier (Romain Duris) experienced Barcelona for a year, where he made real friends for life in a student flat-share. Then in 2005, there was a reunion in St. Petersburg. Nine years later, the third and presumably last part of the L`Auberge Espagnole series is released in cinemas. Xavier is married to Wendy (Kell Reilly), but the marriage has long been on very shaky ground. When Wendy falls in love with an American on a business trip, she ends the marriage and moves to New York with the kids. For Xavier a real nightmare, he can't imagine life without his children. And so, without further ado, the writer also moves to New York, where he initially finds shelter with his lesbian girlfriend Isabelle (C&eacute;cile de France) and her partner Ju (Sandrine Holt). Although with Ju's help Xavier manages to move into a small apartment in Chinatown, his U.S. sojourn seems to end sooner than expected. Because without a residence permit, the Frenchman cannot stay in the land of (un)limited possibilities. And so he is left with only one option: he must marry an American citizen as soon as possible.

Relatingly New York is, on the one hand, a very nice reunion with beloved characters who have evolved in a very true-to-life way. On the other hand, the film is not a sequel in the classic sense. Because not only that you can enjoy Relation to New York without having seen the two predecessors. The film also goes its own way dramaturgically as well as visually, even if they are closely connected to the earlier experiences of Xavier's life. While it's nice to know the twisted paths the writer took to get to the point from which this story takes off, it's not the same story as the previous one. Klapisch then focuses entirely on the events that follow, sprinkling only very occasional allusions to the earlier films into the proceedings. This is exactly how he manages to appeal to viewers who already know Xavier as well as those who weren't in Barcelona and St. Petersburg at the time.

After his first successes as a writer, his marriage to Wendy and the birth of his children, Xavier actually believes that he has now found his place in life. But even in his early forties, he suddenly realizes that fate can hold all sorts of chaos and unexpected changes. And the way he deals with this is as charming and amusing as usual. At the same time, Klapisch rarely relies on very obvious comedy. Rather, he draws a lot of humor from very well-observed snapshots of ordinary life, while still leaving enough room for quieter, emotional and also thought-provoking moments.

Besides Xavier, Isabelle also takes a central role in the story. She seems to be living exactly the settled life that Xavier longs for. But it soon becomes clear that this is just a façade, and that Isabelle, too, isn't quite sure if she's cut out for a quiet, responsible family life. Here, too, Klapisch relies on a successful mixture of humor and melancholy, of tongue-in-cheek irony and true-to-life seriousness. But that's not the only reason why Relationship in New York works really well. The atmospheric shots of New York and some very original visual gimmicks also make this relationship comedy extremely worth watching.

While Barcelona for a Year still remains the best part of this fine trilogy. But Klapisch bids a more than dignified farewell to the characters he has so charmingly built up over three films, with all their all-too-human foibles and their endearing foibles. Despite a few small lengths, Relationship in New York is an all-around successful big city comedy that plays its way into the hearts of the audience with a lot of emotional warmth and authentic wit. If you liked Klapisch's earlier films and are generally a fan of young French comedy, you should definitely book this trip to New York. Worth seeing!