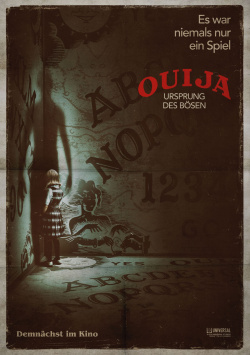 The events from the 2014 scary hit Ouija - Don't Play with the Devil had their dark origins in 1967. Here, widowed Alice Zander (Elizabeth Reaser) lived in a small house in Los Angeles with her two daughters, Paulina (Annalise Basso) and Doris (Lulu Wilson). To make ends meet, Alice earns a few bucks as a medium, though her contact with the afterlife is, of course, one big hoax. But suddenly the humbug becomes deadly serious when a ghost takes possession of Doris. From now on the life of the small family is determined by eerie incidents, nightmares and soon also the first death. But this is only the beginning of a very big nightmare.

Ouija: Origin of Evil is one of those rare cases where the prequel is clearly better than the first film. While this wasn't great art, Ouija - Don't Play with the Devil was below average weak teen horror nonsense with hardly any real moments of suspense. Poorly acted, too conventionally staged and tailored to a target audience that has not yet completely left puberty behind, the film was able to make its money, but found little friends especially among genre fans. That's where this prequel scores much better. Sure, the wheel is not reinvented here. The story is a kind of Best-Of, which throws in everything from The Exorcist to Conjuring. And besides, if you've seen the first part, you already know from the start how the story will end.

And yet, director Mike Flanagan (Oculus) has managed to make this not-so-original horror tale pleasantly suspenseful and even throw in a few successful shock moments. These are still on a relatively harmless level. But they are effective enough to keep the entertainment value pleasantly high. This doesn't make the dialogues any better, but at least it consoles over some weaknesses of the script. The acting of the cast - in contrast to that of the mediocre actors from Part 1 - is also absolutely solid. Not mind-blowing, but thoroughly convincing. So

Ouija: Origin of Evil is no masterpiece - merely in direct comparison with the first part. But you get the feeling that the makers have taken the criticism of the first film to heart and tried to deliver a far better and at least rudimentarily creepy film. And they succeeded well in doing so. If you love the genre and have already seen many films of this kind, you won't really get anything new here. But if you like light scares of the conventional kind and if you don't want it to be too bloody, you can take a look here. Worth seeing