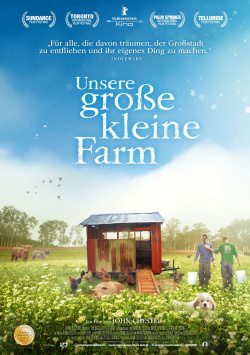 Molly and John Chester love life in the big city. But they love their dog Todd even more. And since he barks too loudly when his master and mistress aren't home, the landlord's notice to quit soon flutters into the house. What to do? The couple makes a radical decision: they want to leave the city and start their own farm in the country. Surely it can't be that difficult? They soon find an 80-acre plot of land in the California hills that could be transformed into a paradise. But is optimism and dedication enough to pull off this project? For eight hard years, Molly and Todd Chester must experience the hardships that come with living off the land. But the two never lose sight of their goal of creating their own little paradise through organic farming.

Multiple Emmy-winning filmmaker John Chester captured on camera the often rocky road to fulfilling their dream. The result is the documentary Our Big Little Farm, which somewhat demystifies the dream of idyllic country living, while at the same time making it very clear why it's still worth investing blood, sweat and tears - and, of course, lots of money - into making that dream come true. The film shows that you often have to fight hard and learn to do without in order to really make a difference. And it shows that nature cannot be manipulated by man.

There is, of course, a certain idealism behind it all. But - and this is the likeable thing about this documentary - there is never an attempt to force it on the viewer. You never get the feeling that the Chesters want to convey that their lifestyle is the only true one. Rather, they make it clear that you shouldn't let setbacks and obstacles stop you from pursuing your dreams. The fact that the two are a good example of how farming beyond mass production can also work is a very positive side effect of their story.

Not to mention that it is truly engaging, moving, inspiring and very entertaining. Our Great Little Farm has all the makings of a good documentary: A relevant topic, sympathetic protagonists, great pictures and a rousing dramaturgy. All this then leads to a very clear conclusion: Absolutely worth seeing!

Cinema trailer for the movie "Our Big Little Farm (USA 2018)"
Loading the player ...