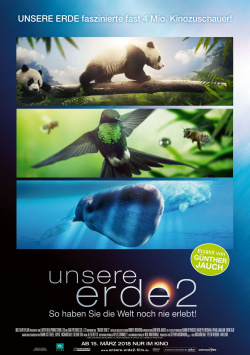 Come along on a fascinating journey through a day on our Earth. Watch as nature and animals awaken, as the sun fills forests, seas and steppes with life, as hunters set out in search of prey that will do anything to make it through the day alive. Learn how living things can exist even under the harshest conditions, how new life emerges while others perish. Join penguins on the difficult journey to provide food for their families or be amused by the advances of a love-struck sloth. In short, be intoxicated by fascinating images that promise one thing: you've never seen our world like this before!

A cocky-sounding promise, but one that Our Earth 2 certainly delivers on. Certainly, the film clearly follows the concept of almost all animal and nature documentaries of recent years. Habitats are examined here (Arctic, desert, oceans, forests), which are nice to look at, but have already been the subject of similar documentaries several times. Only at the very end the interaction of urban spaces with animals and nature is touched upon, which would bring a little variety into the somewhat overused concept of nature documentaries.

With which the film can really score, however, are the spectacular images, which, thanks to the most modern shooting techniques, are among the best and most impressive that has ever been seen in this field. The images are then also what justify the fact that Our Earth 2 is in the cinema. Especially on the big screen, the shots unfold a beauty and power that is hard to resist. Whether in extreme slow motion or razor-sharp close-ups, what the 100 or so crew members captured here on a total of 142 shooting days over the course of 3 years in 22 countries illustrates once again how fascinatingly beautiful our Earth is.

The use of drones and time-lapse sequences create additional impressive images that easily eclipse its acclaimed predecessor, which drew nearly 4 million people to cinemas in Germany alone ten years ago. It's a shame that the success of Our Earth has swamped so many works of similar make and subject matter into cinemas that the at least visually superior sequel is unlikely to receive anywhere near as much attention. But if you still haven't had enough of great pictures and unique shots of our planet's flora and fauna, you should definitely not miss Our Earth 2. Absolutely worth seeing!

Cinema trailer for the movie "Our Earth 2 (Großbritannien/China 2017)"
Loading the player ...