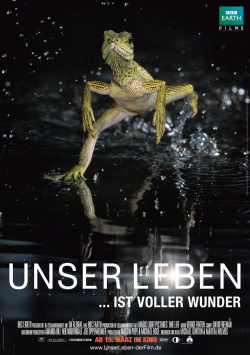 The BBC is renowned for its excellent wildlife and nature documentaries. The Planet Earth series and the resulting hit movie Our Earth are prime examples of the high quality and even higher entertainment value of these fascinating documentaries. Now a quasi sequel is coming to our cinemas. Like Our Earth, Our Life is also the result of a series. Those who have seen Life - The Miracle of Life will certainly rediscover some footage here as well. Nevertheless, the film should not be seen as a pure best-of compilation. Rather, Our Lives is an impressive, fascinating, funny and moving documentary that absolutely must be seen on the big screen.

In recent years, due to the huge success of films like The Voyage of the Penguins and Our Earth, there have been quite a few documentaries that have focused on a wide variety of animal species and habitats. Whether polar bears or sea turtles, whether the African desert or the depths of the oceans, there is seemingly no place on this planet where some film crew has not captured nature and animals in more or less worth seeing pictures. And so one could get the impression that this genre has become over-saturated in the past years and therefore can cause less and less enthusiasm among the viewers. But the crew around Michael Gunton and Martha Holmes have managed the feat of defying all signs of fatigue in the genre and creating a film that captures the wonder of life with great imagery and never fails to amaze the viewer.

35 cinematographers have spent several months equipped with the latest technology to capture sometimes truly unique images that shine in perfect HD quality on the screen. The viewer can watch with what cunning dolphins go on a fish hunt and let their prey fly right into their mouths. The hierarchy of the Japanese snow monkeys is shown, by which only selected members of a herd are allowed to relax in a warming spring. Witness how the nimble proboscis dog outwits its pursuers, or how a gorilla father protects his offspring while defending his territory, how capuchin monkeys learn the art of palm nut cracking from a young age, or how a Venus flytrap attracts its tasty victims.

The whole thing is narrated in the original by Daniel Craig, whose German dubbing voice Dietmar Wunder leads through the action in this country. From birth, rearing and protection of the offspring, from hunting and being hunted, from the search for a mate to the end of life and the beginning of a new generation, Unser Leben takes the viewer on an unforgettable journey. Sure, at times the off-commentary humanizes the animals' behavior too much, and the sound effects also serve more for entertainment value than to reflect reality. But that's really complaining on a high level. Because apart from these really minimal weaknesses, Our Lives is a great, fascinating, funny and moving documentary that you should definitely watch in the cinema. Therefore, if you liked Our Earth, you will love Our Lives. Don't be put off by the nature documentary oversaturation and definitely watch it!

Cinema trailer for the movie "Our Lives (Großbritannien 2011)"
Loading the player ...