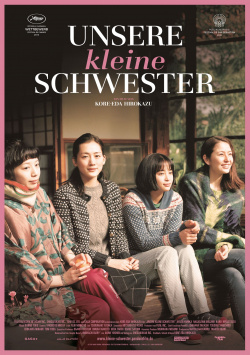 Sisters Sachi (Haruka Ayase), Yoshino (Masami Nagasawa) and Chika (Kaho) go through thick and thin together. Together they live in their family's old house in the small coastal town of Kamakura near Tokyo. The young women haven't had any contact with their father in a long time, since he left them 15 years ago to start a new family. Nevertheless, they want to pay their last respects to him after his death. In the process, they meet her half-sister Suzu (Suzu Hirose), who has now become an orphan. Without further ado, the three sisters decide to take in the 13-year-old girl. Although they are complete strangers to each other at first, a close family bond quickly develops between the four of them, in which only the present counts - until they realize that they also have to face their past.

Based on the manga Umimachi Diary by Akimi Yoshida, director Hirokazu Kore-eda has staged a tender, almost poetic family story with Our Little Sister. As with his last film Like Father, Like Son, slowness dictates the action here. The story is carried by wonderful images and finely observed snapshots. One could almost get the impression that the director dwells on too many trivialities in order to unnecessarily drag out what is in itself a very simple story. Because in over two hours, not much is really told here. At least that's how it seems. But it is really quite worthwhile here to let yourself be carried by the slow narrative flow and to look under the surface.

Because then it reveals what a beautiful film Our Little Sister has become. The drama is extremely emotional without ever getting cheesy. The characters seem very authentic, which is why you as a viewer feel for them even in the little things in their everyday lives. And it's just the many little things that can bring big changes. With a very sensitive hand Hirokazu Kore-eda shows how hard the sisters try to create a harmonious nest for themselves and also to secure a harmonious future especially for Suzu. However, it becomes clear that it's not only the present and the future that hold problems that have to be faced. The past can also keep getting in the way if you don't face it.

In this film, restraint is writ large. It's not just the pacing that's slowed down considerably. The ensemble also plays very low-key in most moments, which pays off especially in more emotional moments. Haruka Ayase, in particular, delivers an extremely strong performance in her restraint as a young woman who has put all of her own dreams and desires on hold in order to take on a sort of mothering role for her sisters. Combined with the gentle score and beautiful imagery, this makes for a very engaging whole that wraps you in a warm feel-good blanket and releases you happily into reality. If you appreciate quiet arthouse cinema from Japan and simply want to be told a beautiful story, you should definitely pay these charming sisters a visit. Absolutely worth seeing!

Cinema trailer for the movie "Our Little Sister (Japan 2015)"
Loading the player ...