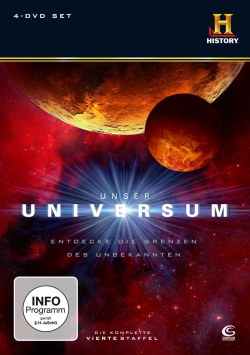 Content: What would life on our planet look like if the moon suddenly ceased to exist? What are death stars and what danger do they pose to life on Earth? Why does Saturn have a ring and what is it made of? In what ways could our Earth be destroyed? What weapons could be used to wage war in space? These and many other questions are answered in the fourth season of the History Channel's series Our Universe, sometimes in an informative, factual way, sometimes in a somewhat lurid way, but always in an entertaining way.

The battle between matter and antimatter, the effects of black holes, or the difference between pulsars and quasars are all addressed in the new episodes. The mixture of expert interviews, very good computer animations and vivid examples may not always seem absolutely scientifically sound. At times, the facts and conjectures are also viewed with a not exactly professional, but likeable wink. But what makes Our Universe so worth seeing is the way in which complex relationships and events from the fields of chemistry, physics or astronomy are explained in a way that everyone can understand. People playing beach volleyball or a flock of sheep make star constellations or the behavior of molecules understandable for everyone.

The series succeeds very well in showing the boundaries between fact and fiction, while always avoiding a too dry or doctrinaire tone. The episode that lays out ten possible scenarios of the end of the world is a perfect example of the entertaining mix that the HISTORY documentary series uses. Where documentaries of a similar nature tend to spread fear and panic, the whole thing here always remains on a rather relaxed level, sometimes even peppered with a little humor, but still always informative and of high quality content.

Who likes rather factual and purely scientifically oriented documentaries, will be rather bothered by the tone that Our Universe sometimes strikes. But if you like to be initiated into the secrets of the universe in an entertaining and visually engaging way, you can't miss the fourth season of the series!

Picture + Sound: The episodes of the fourth season present themselves in decent TV quality. The computer animations in particular look really good and are accompanied by some decent sound effects, which are on a good level, especially for a docu-series. Good!

Extras: The only extra included on the fourth DVD is a bonus episode in English (with German subtitles). While this is worth watching, some background information on the making of the series would have been appreciated. Nevertheless, there is for the bonus material a: Good!

Conclusion: The fourth season of Our Universe once again mixes scientific knowledge with entertaining conjecture, packaged in handsome computer animation and vivid examples. The new episodes present themselves in decent quality, only the bonus material turns out with a bonus episode a bit meager. Who has been entertained by the first seasons well, can access here again confidently. Recommendable