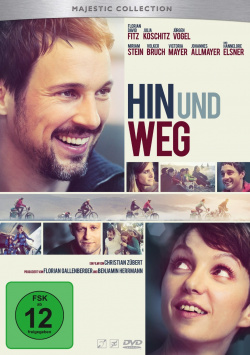 Movie: Every year, friends Hannes (Florian David Fitz), his wife Kiki (Julia Koschitz), Michael (Jürgen Vogel), Dominik (Johannes Allmayer) and his wife Mareike (Victoria Mayer) get together in the summer for a bike tour. This year Hannes and Kiki have chosen the destination. From Frankfurt, they are heading to Belgium. And Hannes' brother Finn (Volker Bruch) is also to join the group. The mood is jolly and they are looking forward to a few happy days among friends, to a break from the typical everyday problems. But when they meet Finn and Hannes' mother (Hannelore Elsner) at their first stop, Hannes reveals to them that this trip has a completely different reason: he has been diagnosed with ALS and doesn't have much time left. His wish is to die with dignity. That is why he has decided to seek euthanasia in Belgium. With the bike tour he wants to say goodbye to his friends and to life and enjoy a few last, carefree days. After an initial shock, Michael and the others decide that they want to make this short time for Hannes as beautiful and exciting as possible - and thereby realize themselves how beautiful and precious life can be...

Following the success of the endearing tragicomedy Dreiviertelmond, director Christian Zübert has once again chosen a very moving material with Hin und Weg. The story reads at first as if it were predestined for overflowing kitsch. Even a cinematic autumn depression was not out of the question with this rather heavy topic. But as with his last film, Zübert has once again shown a good knack for dealing with challenging subject matter. He skilfully avoids the almost inevitable mawkishness and does not fall into the unwieldy dreariness that is so popular in German films. Instead, he has succeeded in making a very entertaining, life-affirming film that delights with its beautiful images and the great acting of the wonderfully harmonizing ensemble of actors.

Florian David Fitz masters the difficult challenge of not letting his acting seem contrived quite brilliantly. Almost more convincingly than he does, Julia Koschitz plays a woman who must come to terms with the imminent death of the love of her life and who tries everything to stay strong for Hannes, so that he will have a few more beautiful last hours and she will still have important, unforgettable memories. Koschitz's play does without any theatricality, is extremely true to life and, precisely because of this, really goes to the viewer's heart in several moments. Also perfectly cast is Jürgen Vogel as a womanizer and child-head, who is, however, well aware of his responsibility as a best friend and stands by Hannes in just the right way on this difficult path.

To say that Miriam Stein (Goethe!), Volker Bruch (Westwind), Victoria Mayer (Das Lächeln der Tiefseefische) and Johannes Allmayer (Vincent will Meer), on the other hand, are relegated to supporting characters is surely wrong. Nevertheless, Fitz, Koschitz and Vogel are clearly in the foreground, but are really perfectly supported by the rest of the ensemble. Even if some moments seem a bit too contrived, the actors make sure at every moment that the friendship between the characters feels genuine. And that is one of the most important factors for the emotional impact of the story.

While there are always light and also very amusing moments in the first two thirds of the film, the last act is dominated by great sadness. Tissues should definitely be kept handy here, because it's almost impossible not to shed a tear or two here. But it is precisely out of this sadness that Zübert allows something quite wonderful to emerge, leaving the audience with a very positive feeling. So in the end Hin und Weg has become a really great tragicomedy, which at the right moments shows the necessary restraint to touch the audience. It is a film that shows that even very difficult topics such as euthanasia, illness and death can be told in an entertaining way without having to become shallow or watered down. It's a film that makes you laugh and cry, that makes you want to live, especially since it deals with the inevitability of death, even for quite young people. All that said, it clearly deserves an Absolutely Worth Seeing!

Image + Sound: The visuals on the DVD aren't spectacular, but they are absolutely satisfying. The picture is absolutely clean, the color scheme is coherent and the sharpness of detail is also on a good level, especially in the bright moments. As for the sound, for a quiet film like this, you can't expect a big sound firework. However, the good mixing of the dialogue and the nice soundtrack, as well as the atmospheric ambient sounds, make for a positive overall impression. Good!

Extras: The bonus material of the DVD has turned out a little disappointing. That's because no real insights into the filming or the background of the story are provided here. Instead, there are short features about the premiere in Locarno (approx. 2:24 min.), about the team in Locarno (approx. 1:32 min.), audience comments after the premiere (approx. 1:11 min.), about the gala premiere in Berlin (approx. 3:01 min.), as well as the promo clip Beste Freunde (approx. 2:10 min.). The interview feature Im Leben von Florian David Fitz (approx. 13:02 min.) and an extensive interview with the youth channel joiz (approx. 25:12 min.) deal primarily with the leading actor and his career, whereby especially Im Leben von Florian David Fitz is well worth watching. A music video by Ryan Keen (approx. 3:55 min.), ten deleted scenes (approx. 12 min.), as well as fan photos, poster designs, a picture gallery and the trailer conclude the additional material, which is unfortunately too superficial overall. This beautiful film would have deserved a little more.

Conclusion: Hin und Weg is a really great tragicomedy, which shows that even very difficult topics such as euthanasia, illness and death can be told quite entertaining, without having to become shallow or watered down. Well acted and engagingly directed - that's how good German entertainment cinema can be! On the DVD, the film presents itself in appealing picture and sound quality. The bonus material is quite extensive, but unfortunately also quite superficial. Nevertheless, there is for this disc a very clear: Absolutely recommendable!