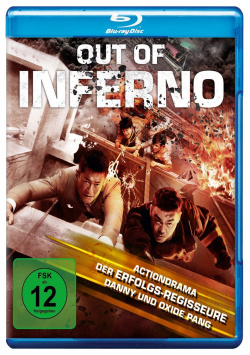 Out of Inferno - Blu-ray

Film: The brothers Dajun (Sean Lau) and Qiang (Louis Koo) were an unbeatable team for the fire brigade. But then, four years ago, Qiang decided to quit his job and to quit his own fire protection company. This decision led to a break between the brothers, which seems to be final. But then fate reunites the two in a particularly cruel way: Just in the high-rise building for which Qiang has developed a state-of-the-art fire protection system, a fire breaks out shortly before commissioning and spreads rapidly. Not only Qiang, but also Dajun's pregnant wife Sile (Sinje Lee), who was in the house for an examination, are now trapped by the flames. Now the brothers have to put aside their differences in order to save themselves and many other people from certain death by fire…

"Out of Inferno" is a very classic disaster movie. Anyone who has ever seen a representative of this genre will be able to predict the complete plot very quickly. The figures are drawn very stencil-like and also their conflicts are a single big cliché. Visually and dramaturgically you often feel reminded of "Flaming Inferno" and "Backdraft" and also the South Korean blockbuster "The Tower" obviously left its traces in the script. But even though there is hardly any originality and there is a certain lack of surprise floating above the whole thing, the movie works out pretty well in the end.

This is mainly due to the fact that the desperate search for a way out of the hell of flames has been implemented in an exciting and fast-paced way. The effects are sometimes spectacular, only in a few scenes you can clearly see that they were created on the computer. There is one scene in particular where slow motion was used very cleverly, which makes it really spectacular. Such moments let the numerous clichés burn into insignificant lumps, which you as a viewer can easily overlook.

Naturally the end is extremely kitschy and completely free of own ideas. And the attempt to make a little social criticism of the displacement of small farmers by constant urbanization cannot really take hold and seems somewhat out of place. On the whole, the legitimate points of criticism may be outnumbered. But if you like disaster movies, you also like to accept the well-known clichés and are still entertained very well. So if you don't expect all the characters to behave rationally or if you don't get some surprising plot twists, you won't get your fingers burnt in this movie. And then there's no doubt: Worth seeing!

Picture + sound: Technically the Blu-ray delivers exactly the good standard that can be expected from a current studio production. The picture is absolutely clean, the harmonious colouring and overall sharpness are convincing, and even when contrasts and black values are matched, there is hardly any reason to complain. The very special atmosphere of the burning skyscraper thus comes into its own. The sound, which is available in a rather lively DTS-HD Master Audio 5.1 mix, transports the dialogues and the sound scenery of the fire harmoniously from the loudspeakers and also has some good surround moments to offer. Good.

Extras: As a bonus, the disc has a decent making of, which is a bit too short 16 minutes for the production. Some quite interesting aspects are revealed, which make this short documentary worth seeing for fans of disaster movies.

Fazit: "Out of Inferno" is a very traditional disaster movie, which reminds of US classics like "Flaming Inferno" and "Backdraft". There are genre-typical stereotypes and conflict situations that need to be dealt with in the face of an enormous disaster. There are no big surprises. Nevertheless, the whole thing is very entertaining for lovers of the subject over long distances. Even if not all effects are convincing, the film offers enough spectacle for an entertaining home cinema evening. The Blu-ray presents the fight against fire in good picture and sound quality and also has a short but informative making of on board. But there is also a satisfied one: Recommendable!