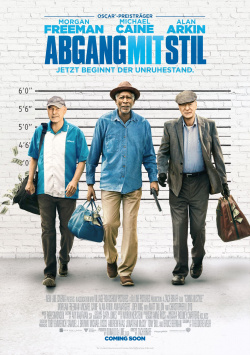 Joe (Michael Caine), Willie (Morgan Freeman) and Al (Alan Arkin) lead a modest but fairly contented retirement existence, which is abruptly shattered when the company they have worked for for decades liquidates its pension funds. For Joe, this has particularly bitter consequences: his house will be taken away from him by the bank in a matter of days, leaving him, his daughter, and his granddaughter out on the street. And for this he should have slaved all these years? Joe doesn't want to accept that and so he persuades his friends to a risky coup: together they want to rob a bank and get the money they are entitled to. But this plan will probably not be quite as easy as they imagine for the no longer quite spry pensioners feasible.

Leaving in Style is a remake of the 1979 comedy The Retired Gang by Martin Brest (Beverly Hills Cop). Actor and director Zach Braff has enlisted an Oscar-winning trio for the remake. Michael Caine, Morgan Freeman and Alan Arkin are the heart and soul of this light comedy, which would surely disappear into the realms of irrelevance without the three. But the good chemistry between the leads ensures that the story is filled with tremendous wit and charm.

Scrubs star Braff, who was particularly convincing with his directorial debut Garden State, doesn't exactly go for subtle tones here. This makes for some somewhat flat gags and an overall predictability. But even that is well countered by the actors. Certainly, even the excellent cast, which also includes the wonderful Christopher Lloyd (Back to the Future) and Ann-Margret (Tommy), can't hide the fact that Departure with Style offers only very shallow entertainment, despite serious topics like poverty in old age and machinations of banks at the expense of their customers. That's not necessarily a bad thing, though, as sometimes it's just nice to be able to switch off at the cinema and just be gently sprinkled.

And in that respect, the comedy delivers really well. The film is charming, funny and entertaining. Even though it could have done with a few rough edges, you can't really blame it for its flaws. If you liked movies like A Crazy Couple or The Best Comes at the End, you'll be in good hands here too and will have a really good time for 90 minutes. Worth seeing

Cinema trailer for the movie "Leaving in Style (USA 2017)"
Loading the player ...