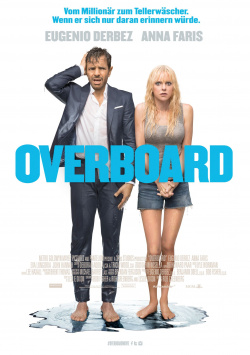 Kate (Anna Faris) doesn't have it easy. The single mother of three has to work hard to get the family through and manage the household and her training as a nurse on the side. She doesn't like being patronized by Leonardo (Eugenio Derbez), whose luxury yacht she's supposed to clean. But Kate is to get her chance at revenge when Leonardo falls off the deck of his yacht after a wild party and washes up on shore with no memories whatsoever. Without further ado, Kate claims Leonardo is her husband and henceforth lets him live the simple life of a hard-working family man. But the longer this lie continues, the harder it becomes for Kate not to be attracted to her husband.

Overboard is a remake of the 80s comedy of the same name starring Kurt Russell and Goldie Hawn. However, with the signs reversed. Whereas in the original Kurt Russell was the simple handyman who pulled spoiled goldfish Goldie Hwan out of the water and put her into a simple life, this time around Mexican superstar Eugenio Derbez gets to really let loose as the spoiled brat, while Scary Movie mischief-maker Anna Faris takes on the more grounded role of the single mother. The original still occupies a loyal fan base, but now doesn't necessarily rank as one of the immortal comedy classics of the 80s. Therefore, the remake is perhaps unnecessary, but shouldn't be considered sacrilege.

TV director Rob Greenberg (How I Met Your Mother, Scrubs) has turned the familiar material into a harmless family comedy that doesn't quite offer any big laughs, but on the other hand doesn't really hurt either. The embarrassment factor, which is unfortunately very high in many contemporary comedies, is fortunately kept within limits here. Yes, the whole thing is very flat and predictable. And yes, the ending can't be beaten in terms of overdone kitsch. But still, as a viewer you will be entertained quite well for almost two hours.

Derbez and Faris have good chemistry, which also saves the film over some of its very flat gags. And in some moments, the production even reveals something like charm, which - even if you don't want to admit it - gets to your heart just a tiny bit. Overboard is very simple cinema entertainment. Light on the finish, but also quickly forgotten. If you don't expect more, you'll be well served here. In this case then also quite still: Worth seeing!

Cinema trailer for the movie "Overboard (USA 2018)"
Loading the player ...