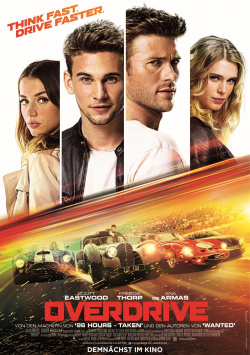 Brothers Andrew (Scott Eastwood) and Garrett (Freddie Throp) are masterful car thieves. There's hardly an expensive ride that would be safe from them. Their specialty is exclusive collector's items that bring in extra money. But when they steal from gangster Jacomo Morier (Simon Abkarian), they seem to have messed with the wrong guy. The unscrupulous Morier grabs the brothers and gives them an ultimatum: if they want to get out of this alive, they have to steal a particularly valuable car from Morier's arch-enemy Max Klemp (Clemens Schick). It's an almost hopeless situation, as Klemp has the car stashed away by an elaborate security system. But the brothers have a plan for such a situation as well - now they just need the right team for it.

Overdrive isn't the first attempt to get a piece of the Fast & Furious success pie. It is, however, the first film that at least had the potential to do so. After all, the screenwriters already co-wrote the second installment in the PS franchise, and lead actor Scott Eastwood was part of the ensemble cast for the latest installment in the blockbuster series. They've also found a producer in Pierre Morel (Transporter) who has a knack for solid action fare. Only is all this enough to even be in a league with the Fast & Furious movies? The answer is a very clear NO!

Admittedly, the cars are really wonderful. And the backdrop of the French Riviera is also pleasing to the eye, which can also be said of most of the cast. But that is about it. The story is okay at its core, just told in an absolutely amateurish way. The dialogue is laughable-except when it's trying to be funny and cool-the characters are almost cartoonish clichés, and the action is neither fast nor furious. Granted, there are some fairly entertaining moments. But these are so few and far between that they almost go completely under.

Overdrive is the kind of B-movie that gathered dust in video stores en masse in the 80s and 90s. Just a little more polished and pimped out. This hides a little bit, but in the end it can't hide the fact that this is just a cheap clone of a franchise that isn't known for its depth of content anyway. With a little more courage for self-irony, a little more interesting characters and a little more fast-paced action the whole thing could have at least been fun and entertaining trash. As it is, however, all that's come out of this is an unintentionally hilarious pickle that, despite its beautiful visuals, is ripe for the scrap press after just a few minutes. When a movie makes the dialogue from the Fast & Furious movies seem downright Oscar-worthy, you know something has gone mighty wrong here. Therefore: Only for really hardcore fans of beautiful cars still worth seeing!

Cinema trailer for the movie "Overdrive (Frankreich 2017)"
Loading the player ...