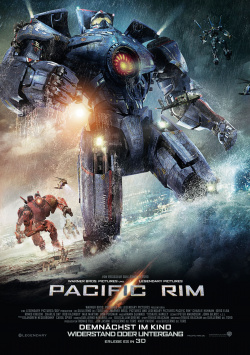 Always believed that aliens, if they ever came to Earth, would come flying in from space in big spaceships. Far from it! The danger lurks not in the vastness of space, but in the depths of our oceans. Here a portal has opened up between our world and another universe, from which gigantic monsters, called Kaiju, emerge at regular intervals and cause destruction, death and despair. Humanity fights back against the Kaiju with giant robots called Jaegers. At first, this is relatively successful. But the monsters grow stronger and stronger, and they appear at increasingly frequent intervals. Led by the intrepid Stacker Pentecost (Idris Elba), former Jaeger pilot Raleigh (Charlie Hunnam) is to go into the all-important battle against the Kaiju. Although Raleigh, who retired from the Jaeger program after his brother's death, is initially reluctant to pilot one of the giant fighting robots again, he changes his mind when he seems to have found the perfect co-pilot in inexperienced recruit Mako (Rinko Kikuchi). But as the Jaegers prepare to close the portal between worlds forever, scientist Newt (Charlie Day) makes a discovery that makes Pentecost question his entire warfare.

After Guillermo del Toro relinquished his directing duties on the Hobbit films to Peter Jackson, he really wanted to devote himself to adapting H.P. Lovecraft's horror story Mountains of Madness. But despite Tom Cruise's interest in the lead role and James Cameron's availability as a producer, the studio felt that financing an extremely expensive film aimed at an all-adult audience was too risky, and the production was scrapped despite good omens. But instead of moping around, the filmmaker really let loose on another heartfelt project. Nearly $200 million was at his disposal to bring Pacific Rim to the big screen. And del Toro wanted to use this money to offer his audience the best possible monster sci-fi action film. And he succeeded impressively.

The trailers for the film led one to expect a mix of Godzilla and Transformers. But del Toro has managed to do what Roland Emmerich and Michael Bay failed to do. He has directed a visually superbly realized battle of materials that just doesn't rely solely on monsters, fighting robots, and destruction, but also has engaging characters, excellent set design, and del Toro's own special brand of humor to offer. Certainly, Pacific Rim is neither logical nor dramaturgically sophisticated cinema. The story uses a lot of clichés and the characters are also drawn in a very stereotypical way. Nevertheless, del Toro mostly manages to put his own stamp on the whole thing with only little tricks or dialogue sequences and to give it a human touch, which prevents the fight between Kaijus and Jaegers from degenerating into a soulless material battle.

This becomes especially clear in the way del Toro draws the two nerds Newt and Gottlieb (Burn Gorman). While Raleigh in particular gets to shine as a more stock action hero, del Toro gives the two scientists their own story arc, in which Newt in particular also gets to prove himself as a hero with the tools at his disposal. The world is saved here not only by muscles, but also by brains. But del Toro is also able to inject enough character into the other characters, such as Pentecost, wonderfully embodied by Idris Elba (Luther, Prometheus), or Charlie Hunnam's (Sons of Anarchy) Raleigh, to protect them from complete interchangeability. And then, with his Hellboy star Ron Pearlman, he enriches the action with a fair amount of coolness and a pleasant dash of humor that adds to the film's entertainment value.

Naturally, though, the focus is squarely on the giant monsters and the attempt to destroy them with equally large robots. And again, Guillermo del Toro and his team have done a great job. Unlike recent Man of Steel or but the Transformers movies, the fight sequences aren't cut too overwhelmingly fast that you can barely notice them. Even though some details are repeatedly swallowed up by darkness, you can almost always see what the high budget was used for. The special effects are great and the design of the monsters scores some original ideas.

Pacific Rim works so well precisely because Guillermo del Toro's primary concern was to entertain his audience. He wanted to direct a really great fun movie, where you get something for the eye, where you can laugh sometimes, without resorting to cheap pee-pee jokes, such as in Transformers 2. A film that is exciting, with great effects for wide eyes and takes the audience for two hours completely out of everyday life. Logic and sophisticated dramaturgy? Are overrated. After all, there are monsters and big robots! If you just want to see some really good popcorn entertainment and haven't let the cynicism that is unfortunately everywhere take away your enthusiasm for great fantasy stories, you should definitely not miss Pacific Rim. Absolutely worth seeing!!!