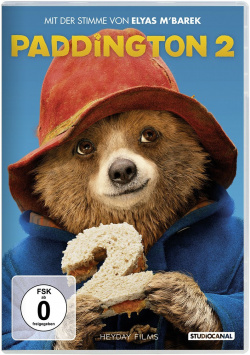 Film: Paddington (spoken by Elyas M`Barek), London's most popular bear, is back! In the meantime he has settled in well with his new family, the Browns, and has become a valuable member of the church. He even has a job: He works in old Mr. Gruber's antique shop (Jim Broadbent). Here he also wants to find a present for his aunt Lucy, who will soon be 100 years old. An old Pop Up book about London would be absolutely perfect - but unfortunately this enchanting book is very expensive. Only the self-involved actor Phoenix Buchanan (Hugh Grant) knows how valuable it really is, though, who snatches the book under his nail one night. Too bad that the suspicion of theft falls on Paddington, who watched the break-in and followed the crook. But nobody wants to believe him and the little bear ends up in prison. Only the Browns believe in his innocence and they do everything they can to restore Paddington's reputation…

The director Paul King conquered the hearts of cinema audiences almost three years ago with the film adaptation of the stories about the bear Paddington, conceived by the British writer Michael Bond. Paddington, who has enjoyed enormous popularity for over five decades, especially in his native Great Britain, and who has experienced numerous adventures in several books, a puppet series as well as an animated film series with the Browns, attracted over 2 million visitors to cinemas in Germany alone. Under the direction of "Harry Potter" producer David Heyman, Paul King has brought the adorable bear back to life - a feat that he has now succeeded again.

At first "Paddington 2" gives the impression that the film suffers from the typical sequel syndrome and therefore cannot reach the class of part 1. Some scenes from the first movie are taken up again and shown slightly varied and Paddington's clumsiness causes even more turbulent chaos than in the first movie. You get the feeling that they are trying with all their might to add a shovel to what worked so well the first time. But fortunately this impression lasts only a few minutes. Because then "Paddington 2" not only turns into one of the funniest, most original and lovable family films of the year, but also into one of the few sequels that is better than the first part.

This is primarily due to the story that found a wonderful villain in Hugh Grant. As a slightly schizophrenic actor driven by an insane ego, he is not only allowed to slip into different roles, such as "the most attractive nun I've ever seen", but he can also make fun of his former Sonny-Boy image. This is so much fun, that the movie already gains entertainment value compared to its predecessor. On the other hand, it's the unpredictability of the playful ideas King uses that makes this sequel so successful. The entire storyline in prison is full of surprises - both dramatic and visual - and provides some of the funniest and most imaginative scenes of the past cinema year.

A big compliment goes to King and his co-author Simon Farnaby for the way they handled the emotional moments of the story. They skilfully avoid using too much pathos or kitsch and thus create something heartwarmingly beautiful, which is becoming increasingly rare in commercial family films. Alone the last minute of the movie is a little trick in this respect, as this emotional climax is actually only hinted at and not exploited. And that is exactly why it is so effective and makes even seasoned men cry. If you don't get wet eyes here, you really have a heart made of stone ;-)

"Paddington 2" is an almost perfect movie for the whole family. If some scenes had been downshifted, there really wouldn't be any criticism of this bearish fairy tale. If you liked part one, you'll love this movie. A film to laugh, to feel good and to sob - cinema can be so beautiful! Absolutely worth seeing!

Picture + Sound: The picture is particularly striking for its great coloration. This makes the already very nice, playful equipment even more inviting and the emotional warmth of the story is also made visually noticeable. The rest of the time, too, the realization of the picture can please with a good overall sharpness and harmonious contrasts. The sound is dominated by dialogues and music, with harmonious ambient noises and some nice sound effects providing some movement in the surround range. Good.

Extras: The additional material of the DVD has a short Making of (approx. 4:24 min.), a view into the dubbing studio (approx. 3:27 min.) and on the German premiere (approx. 3:26 min.) and a music video (approx. 1:31 min.) still a round of questions with the makers and actors (approx. 34:03 min.) to offer. A very likeable and interesting audio commentary by director Paul King and the trailer for the film round off the additional offer.

Fazit: "Paddington 2" is one of the rare examples of sequels that are actually better than the first part. Even more humour, an even more playful setting, even more heart and a great Hugh Grant make one of the most beautiful family films of recent years. The DVD presents the film in very good picture and sound quality. The good audio commentary and the short making of are particularly noteworthy in the bonus material. Clearly: this disc belongs in every good home cinema collection!