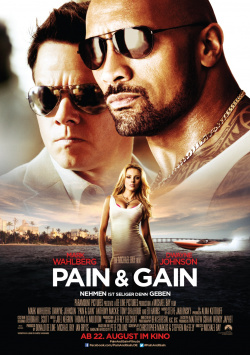 After blowing a $195 million budget on his last Transformers movie, Michael Bay has decided to squeeze in a much cheaper project that has been near and dear to his heart for over a decade before his next expensive Transformers material battle. By having not only him, but also his lead actors Mark Wahlberg and Dwayne Johnson forgo much of their fees in favor of a share of the box office, Bay has finally been able to film the true story of a group of bodybuilders who made a splash in Miami in the 1990s with kidnapping, extortion, robbery and murder for a mere $26 million.

Based on a series of articles published by Pete Collins in the Miami New Times in 1999, Pain & Gain tells the story of Daniel Lugo (Wahlberg), a personal trainer with a criminal record for fraud who just can't face the fact that he's not having any real success despite putting so much work and ambition into his body. An arrogant, sleazy guy like his client Victor Kershaw (Tony Shalhoub), on the other hand, has millions. That's just not fair. And that's why one day Daniel decides he wants to take everything Kershaw owns. Together with his steroid-impaired colleague Adrian Doorbal (Anthony Mackie), Daniel hatches a plan that is, in his eyes, foolproof. Paul Doyle (Dwayne Johnson), who has just been released from prison, is supposed to help them implement it. After some teething problems, the trio actually succeed in kidnapping the millionaire and snatching his fortune. Too bad he recognizes his personal trainer by his distinctive cologne. The attempt to kill Kershaw and make it look like a suicide fails - and yet Daniel, Adrian and Paul seem to get away with their coup. Because the police won't believe a word the tortured and confused millionaire says about three bodybuilders kidnapping him and robbing him of his fortune. But Victor doesn't give in that easily.

You can clearly tell Pain & Gain that Michael Bay really enjoyed not having to worry about family suitability and political correctness for once. Since most of the money at stake was his own anyway, he could really let off steam, which then manifests itself on screen in the form of his trademark over-the-top aesthetics, completely over-the-top humor and almost slapstick bordering violence. Especially at the beginning this works really well. Because here he tells the story with downright satirical sideswipes at the American dream. But the biting and even clever moments give way more and more often to flat gags, which are mainly below the belt. Moreover, Bay loses himself again and again in slow-motion shots, images of beautiful bodies and overwrought comedy interludes that extremely dilute the basic essence of the story.

While Bay tries with all his might to prevent the three bodybuilders from appearing sympathetic. But as he degrades them to joke figures, it seems quite disrespectful to the victims of the three and their relatives. Because even if the true story sounds absolutely bizarre, it's not really laughable. The fact that Bay then made a very shrill action comedy out of it leaves a somewhat pale aftertaste. The whole thing is entertaining despite some borderline-debatable interludes, but given the real background, the film would simply have worked better if Bay had emphasized the in the beginning recognizable satirical undertone much more clearly.

When ex-wrestler Dwayne The Rock Johnson meets an old WWE rival in a prison scene, or Mark Wahlberg allows himself a little side-swipe at his beginnings as a Calvin Kline underwear model, when Hangover star Ken Jeong delivers a completely over-the-top, yet unfortunately not at all unrealistic performance as motivational trainer Johnny Wu, or Daniel presents his new, wealthy neighbors with a special kind of security training, the film repeatedly shows potential that is too rarely used in the end. A few very nice and also funny moments, the sometimes overly self-deprecating acting of the actors and the harmonious soundtrack do console a bit over the flat moments and the somewhat indecisive basic tone of the production. But in the end, given the many weak points, this is simply too little to leave a truly positive impression.

Who expects an over-the-top rogue comedy with crude humor and licked Michael Bay optics and can do without dramaturgical depth and clever, subtly served gags, Pain & Gain will offer really good entertainment, especially in the first hour. All others should rather enjoy this testosterone bomb with caution. Therefore, there is also only with significant deductions still a: Worth seeing!