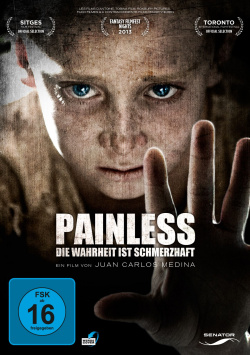 Content: In a small Catalan village in the early 1930s, a mysterious disease breaks out that makes it impossible for the children to feel pain. Since the government considers them a danger to themselves and to the public as a result, the decision is made to lock the children away in a remote asylum. There, renowned German physician Dr. Holzmann (Derek de Lint) plans to use special therapy to teach the children what pain is. But the war and other adversities keep getting in the way of a successful outcome to this endeavor in the years that follow...

Many decades later, surgeon David's (Alex Brendemühl) life is changed when his wife, Anaïs, dies in a car accident. Then, when he also learns that he has cancer, David loses all will to live. Only a bone marrow donation from his parents could save him now. But when the doctor finally decides to ask them for this favor, he learns a surprising truth that leads him on the trail of the terrible secret surrounding his true origins...

With his feature-length debut Painless, Spanish director Juan Carlos Medina has staged a very interesting drama that tells its stories on two different time and plot levels, which are only brought together at the end for a common resolution. The script, co-written by Medina with Luiso Berdejo ([rec]), is cleverly constructed and comes up with some very effective goosebump moments. Mixed with elements of mystery and supernatural horror, the plot line beginning in 1931 in particular manages to build an engagingly dark and intriguing atmosphere. The idea of a disease that makes children simply unable to feel pain and the depiction of the sometimes terrible consequences this can have is original and holds enormous potential for suspense. Medina is then able to exploit this well, despite many very quiet scenes.

The story about David and his search for his past in the face of his impending death, set in the present, is also exciting, but cannot match the intensity of the fate of the imprisoned children in a direct comparison. Still, the drama remains rousing for long stretches and can convince both visually and in terms of acting. Only towards the end the whole thing loses its power. The resolution is quite predictable after a while and doesn't quite live up to the expectations built up by the good initial idea.

However, even if the ending disappoints, Painless is overall a very successful debut that mixes very human horror with supernatural terror to create a gripping drama with many qualitative highs and only a few lows. If you appreciate horror dramas of the more sedate kind, you should definitely give this one a look. Worth seeing!

Picture + Sound: The picture is dominated by a rather gloomy basic mood, which is underlined by the rather reduced color scheme. The image sharpness is on a good level in most moments, only in very dark sequences here and there slight image noise and minor blurring can be detected. But overall, the picture captures the atmosphere of the story very well, which can also be said of the overall rather restrained sound, which in many scenes focuses only on dialogue, the music and minor ambient sounds. Only occasionally do effectively implemented sound effects provide more movement in the surround. Overall, this gets a: Good!

Extras: As a bonus, there is on the DVD the trailer to the film and a quite worth seeing Making of (about 24 min.). Quantitatively not exhilarating, but qualitatively perfectly fine!

Conclusion: Painless is an interesting and sometimes exciting drama with mystery and horror elements. The two storylines of the story are carefully built up and can convince in their own right. Only the way they are connected at the end is a bit disappointing compared to the strong beginning of the film. Nevertheless, Juan Carlos Medina has delivered a promising directorial debut with Painless, which can definitely be recommended to lovers of supernatural thrillers. Recommended