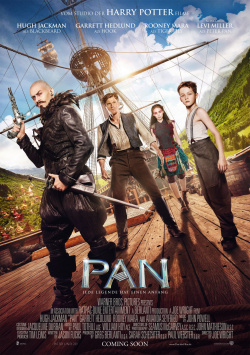 The story of Peter Pan, invented by author J. M. Barrie at the beginning of the 20th century, is probably known to everyone. The boy who never grows up and who fights against the evil Captain Hook in faraway Neverland has been adapted countless times for the stage or filmed for cinema and television. Often these were direct adaptations of Barrie's stories. But sometimes these film adaptations go their own way. This is also the case with the latest version, which Joe Wright (Abbitte) brings to our cinemas. It tells the story of orphan boy Peter (Levi Miller) who, amidst the turmoil of World War II, is kidnapped from the orphanage with other children and taken to magical Neverland. Here he is supposed to work in dark mines for the evil pirate Blackbeard (Hugh Jackman). But then it turns out that Peter is a very special boy who could be extremely dangerous to the pirate captain. With the adventure Hook (Garrett Hedlund) he manages to escape and together with the fighter Tiger Lily (Rooney Mara) they go to battle against Blackbeard to free Neverland and the fairies from evil once and for all.

Pan is full of good and beautiful ideas. When Blackbeard's pirate ship engages in a wild chase with fighter planes in the skies over London, when Peter learns more about Neverland and his destiny in an imaginatively animated sequence, or when Peter and Hook flee Blackbeard's henchmen, the film offers extremely high levels of spectacle as well as ingenuity. But unfortunately, Wright tries to squeeze too many different ideas into his vision, some of which he's clearly borrowed from other films. A little Pirates of the Caribbean, a little Indiana Jones, even a touch of Mad Max and Avatar are evident here. There are also some uninspired vocal interludes, even if they don't really make sense. Taken on their own, many of the ideas, while they may be stolen from other films, are good and pretty to look at as well. But unfortunately Wright doesn't manage to bring them together in a coherent way.

So the result is a completely overloaded, inconsistent overall picture that lacks one thing above all: Charm! The production seems too strategically geared towards mass tastes and thus completely loses sight of the emotional warmth that a Peter Pan story in particular needs. Moreover, the spasmodic attempt to appeal to the widest possible audience achieves exactly the opposite: for small children the adventure is too dark and overloaded, for adults too colourful and the humour too silly. Only children between the ages of 8 and 13 might enjoy Peter's first visit to Neverland. A good family film, which Pan should be, but Joe Wright has unfortunately not succeeded.

There it also helps little that especially Hugh Jackman, despite somewhat silly outfits, an infectious joy of playing on the day, which sometimes even makes the extremely wooden game of Garret Hedlund forgotten. The film is a clear case of too much wanted and therefore too little achieved. And in the end it can only be rated "worth seeing", with some significant deductions