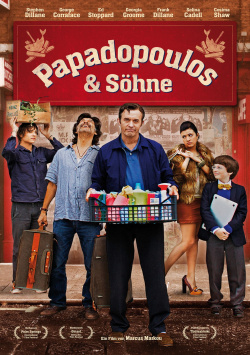 Harry Papadopoulos (Stephen Dillane), an English businessman with Greek roots, actually has everything going for him. He owns a successful company for Greek specialties, lives with his three children Katie (Georgia Groome), James (Frank Dillane) and Theo (Thomas Underhill) in a dream villa, he was just awarded European Entrepreneur of the Year and is about to fulfill a very big dream with the construction of Papadopoulos Plaza. But Harry lacks one thing: a zest for life. He seems to have lost it completely with the death of his wife. But so far he has been able to maintain at least the appearance of a happy life thanks to his prosperity. But then the economic crisis hits the entrepreneur with full force. Suddenly Harry and his children are out on the street with empty pockets. Only a run-down Fish & Chips shop, which Harry owns together with his brother Spiros (Georges Corraface), remains for the family. Together with the chaotic Spiros, the luxury-loving Papadopoulos children now find themselves in a less than posh area of London, where the Fish & Chips shop is to be the family's new source of income. But in order to do so, the ramshackle shack must first be refurbished. Is this the end of Harry's dream?

Papadopoulos & Sons is an amusing and refreshingly light examination of the global financial crisis. British-Greek director Marcus Markou tackles the subject in a refreshingly ironic way, spiced with a humorous lightness that one would hardly have expected when dealing with this topic. Markou refrains from any form of drama of consternation, but does not ridicule the whole thing either. Rather, he finds a coherent mixture of humor and seriousness, which is well conveyed by the ensemble of actors. Stephen Dillane (Game of Thrones, The Hours) is particularly convincing as an initially emotionless, stiff Briton who only slowly rediscovers his long-lost Greek joie de vivre.

It is precisely the play with cultural clichés and stereotypes that wrings a lot of humour from the story. Yet its core, of taking the crisis as an opportunity for a second chance, a complete fresh start, is filled with a certain seriousness that prevents the film from drifting into overly shallow silliness. But for all its good ambitions, its amusing scenes and its endearingly drawn characters, Papadopoulos & Sons also struggles with some problems that get in the way of an unclouded positive overall impression.

For example, Markou repeatedly has very obvious problems finding the right timing. There's a photo montage in the last third, for instance, that's accompanied by music and lasts far too long and would actually have fit better with the end credits. And also in other moments scenes are stretched out too much, so that every gag, no matter how good it is, completely fizzles out. The potential for really good laughs is always there. But Markou lets these chances slip away again and again and lets good scenes suffer from a much too leisurely pace. And unfortunately also here applies: just missed is also over!

Despite this not quite insignificant shortcoming Papadopoulos & Sons has become but still a nice and entertaining comedy, which brings its audience not to the hearty laughter, but just to the amused smirk. It's a charming feel-good movie about the global financial crisis - and that's a small feat in itself. If you appreciate likeable comedy with a bit of British dry humour and likeable characters, Papadopoulos & Sons can show you how the crisis can turn Fish & Chips into a real delicacy. Worth Seeing