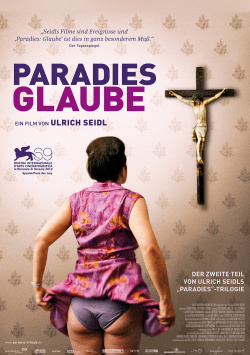 In the second part of his Paradise trilogy, director Ulrich Seidl tells the story of the strictly religious Anna Maria (Maria Hofstätter), who has dedicated her life to one goal: she wants to convince other people of the love she experiences through her Christian faith. The nurse therefore uses her vacation to travel around with a travelling statue of the Mother of God in order to bring the word of God closer to immigrants and other non-believers. After all, Austria should finally become more Catholic again. But then Anna Maria is haunted by her own past. Her husband Nabil (Nabil Saleh), a wheelchair-bound Muslim, returns to her from Egypt after years away, hoping to resume their married life together. But Anna Maria's love belongs only to Jesus Christ. And so a small war begins between the two, which is not only fought on a religious level, but soon on a very personal one as well.

The films of Ulrich Seidl are already of a caliber all their own. With his unembellished, sober and yet almost documentary style and scenes that sometimes give the feeling of simply not wanting to end, Seidl's works elude almost any form of common viewing habits. For fans this makes the films something very special, but for other viewers this makes them look extremely unwieldy, exhausting or even boring. Paradise Faith is no exception. After the filmmaker tackled the topic of sex tourism in his own special way in Paradise Love, this time he goes after religion. It is somehow fascinating how Seidl, with a lot of biting cynicism and almost satirical references, creates the picture of a woman who, wherever possible, preaches about the love of God and, in particular, worships a leading figure of charity, but who, in principle, is filled with fear and contempt towards all people who do not share her faith. The fact that she lacks any form of helpfulness and feeling, especially towards her husband, testifies to a completely misunderstood understanding of faith, which is not only excellently played by Maria Hofstätter, but also staged in an oppressive way.

It is a pity that Seidl packages his inherently interesting themes in such an unwieldy and inaccessible way. Especially since there is always the question if all scenes really have a real meaning or if the director just wants to provoke for the hell of it. This feeling already came up with Import Export and in a weakened form with Paradise Love. In Paradise Faith, the question is forced upon us in a sequence in which Anna Maria witnesses a nocturnal orgy in the park on her way home. It is not the fact that the ladies and gentlemen whom the viewer has to observe during a lively group copulation do not exactly belong to the most attractive group of people that has a negative impact here. Rather, it is simply not clear why the open-air copulation has to be shown in all details and above all in the most detailed length. The effect on Anna Maria becomes clear after only a few seconds and through the following scene. So this sequence in this form ultimately has only one purpose: to provoke and to swim against the tide of commercial filmmaking at all costs. And this does not give the film any additional quality or depth, but takes away much of the power that other scenes can certainly exude.

Whoever appreciates the films of Ulrich Seidl will, of course, be only slightly bothered by this. Especially since Paradise Faith provides much more and deeper discussion than Paradise Love and is dramaturgically very interesting because of its irreverent treatment of the subject. If you like Seidl's style of production, this second part of the Paradise Trilogy can be recommended to you. But if you already had problems with his earlier films, this one will definitely take you very close to the limits of what you can bear!