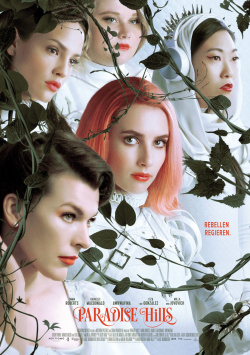 Rebellious Uma (Emma Roberts) wakes up one day in a treacherous paradise. Against her will, she has been shipped off by her parents to Paradise Hills, an isolated island where girls from wealthy families are sent to become the best version of themselves. Behind a friendly, naive facade, the Duchess (Milla Jovovich) rules here with an iron hand. A personalized treatment is supposed to lead the girls on the right path. But Uma refuses to be manipulated. With her new friends Chloe (Danielle McDonald), Yu (Awkwafina) and pop star Amarna (Eiza Gonzalez), she plans to escape the island. But by the time she gets to the bottom of the sinister secret hidden behind the dreamlike setting of Paradise Hills, it may already be too late to escape.

You have to hand it to Alice Waddington's directorial debut, Paradise Hills: The film looks smashing. The director is able to build an oppressively beautiful atmosphere, which the production is able to benefit from extremely well until the finale. You can almost lose yourself in the indulgent images and feel almost as numb as the girls who are subjected to a very special form of brainwashing here. In that respect, this film is really something special. The ensemble of very different actresses can also be considered a plus point. You quickly feel inclined to give this mystery drama a thumbs up. But unfortunately the muddled story puts a spanner in the works.

You get the feeling that Waddington wanted to stage an overlong Black Mirror episode here, but without ever reaching the dramaturgical class of that series. Not only is the mystery surrounding the island nowhere near as surprising or shocking as the creators probably intended. No question: The idea behind this mystery is not bad at all - and also a little bit frightening. Because if you think about it a little harder, you unfortunately come to the conclusion that there would actually be some people who would use the services of a facility like Paradise Hills if it really existed.

On the other hand, though, thinking about it a little longer reveals that the idea isn't even that new. There was a film back in 2005 that made use of a very similar surprise twist (which one it was, we won't reveal, as connoisseurs of that film would then immediately know what Paradise Hills was all about). It's undeniable that Paradise Hills has a special charm and looks really great. But there's not as much behind it as it might seem at first. And for that, the "worth seeing" can only be given with restrictions.