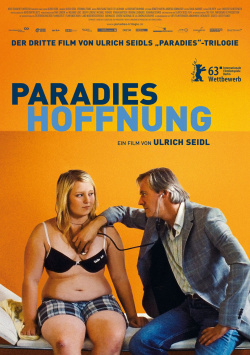 In Paradise: Hope, the third and final part of his Paradise trilogy, director Ulrich Seidl tells the story of Melanie (Melanie Lenz), the daughter of Teresa (Paradise: Love) and niece of Anna Maria (Paradise: Faith). While her mother is on holiday in Kenya and her aunt is wandering through Vienna with a statue of the Wandering Mother of God, the overweight girl is supposed to spend her holidays at a diet camp in the countryside. Shortly after her arrival, Melanie realizes what awaits her here: strenuous exercises in the gym, healthy and greatly reduced food and extensive medical examinations. It doesn't sound very pleasant. But after Melanie makes friends with her three roommates and especially with the somewhat older Verena (Verena Lehbauer), the world starts to look a little better. But then something happens that completely upsets Melanie's emotional world: she falls in love with the diet doctor (Joseph Lorenz), who is more than 40 years older than her, and dreams of her first great love. In her still completely innocent way, she tries to seduce him, to which he doesn't seem to react at all at first.

On the one hand, this is entirely appropriate for this story, since most of the film's protagonists are, after all, underage girls and boys. On the other hand, this very restrained production by Seidl's standards reveals even more clearly the slowness inherent in all his films. And that can quickly become boring for some viewers. Certainly, it soon becomes clear what Seidl wants to achieve with his stories. But the way he always chooses to do this, despite its closeness to life and its quite commendable genuineness, takes a lot of getting used to and is simply too unwieldy for untrained viewers to really work.

Seidl's Paradise Trilogy is undoubtedly an interesting and ambitious project that the director has brought back to life with Paradise: Hope in an almost surprisingly restrained way. But in all three films there is always the feeling that the director gets in his own way with his ambitions and tells his stories, which are not unimportant in themselves, in such an unwieldy way that they are only accessible to the smallest possible audience, instead of making them a little more accessible and thus giving them the attention outside of the feuilleton community that they actually deserve. And so, in the end, the same applies to this third film: only those who appreciate Ulrich Seidl's work and can get involved with his very own style can also be recommended Paradise: Hope can be recommended again