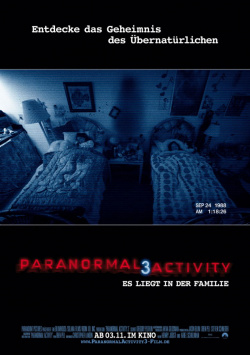 The Paranormal Activity series is undoubtedly one of the biggest success stories of recent years. After the first installment grossed over $193 million worldwide in 2009 at a production cost of just $11,000, Part 2 even managed to increase that success. A third part was of course quickly decided. This time Henry Joost and Ariel Schulman, who caused a stir in the USA with the very good (although probably completely staged) documentary Catfish, took a seat in the director's chair. Even if the concept of the Paranormal Activity films has worn a bit thin, the two directors have still directed a good third installment that effectively uses the successful elements of the first two films and continues them consistently.

Paranormal Activity 3 begins just under a year before the dramatic events of Part 2: Katie (Katie Featherston) has found some items in her grandmother's estate to store with her sister Kristi (Sprague Graydon), including a box of old videotapes from 1988 and 1992. A year later, these tapes are stolen in a burglary (which takes place during the events of Part 2). Part 3 now shows what's on the 1988 tapes: 8-year-old Katie (Chloe Csengery) and 5-year-old Kristi (Jessica Tyler Brown) live together with their mother Julie (Lauren Bittner) and her boyfriend Dennis (Christopher Nicholas Smith). When some strange events occur, Dennis, who films weddings for a living, sets up cameras throughout the house to get to the bottom of the mysterious occurrences. It seems that Kristi, who is constantly talking to her imaginary friend Toby, is the key to the events. But as the haunting continues unabated and Katie in particular becomes more and more endangered, the young family seeks shelter with Julie's mother Lois. But this is where the horror really begins.

Paranormal Activity 3 does answer some questions about why the demon chose Kristi and Katie, of all people, and suggests why the sisters can't remember the traumatic events of 1988. But at the same time, the film also raises an extreme amount of new questions. After what happened back then, it's not only questionable why the video cassettes still exist and haven't been destroyed. Furthermore, the family relationships would have to be reconsidered due to some specific statements from parts 1 and 2. The videos from 1992 could shed light on this, which could be a basis for the fourth part. The fact is that there are some logic holes being plugged here, with much bigger ones opening up that definitely need to be plugged by the creators to bring the series to a satisfying conclusion.

Besides that, Paranormal Activity 3 has some very good shock effects to offer. Sure, especially in the first third, the whole thing may sound like another rip-off of the first films, something that even Part 2 struggled with. But gradually the ominous atmosphere wins out over the high recognition value. Especially since the way the story develops is definitely good for some surprises. Not all fans will be happy with the new twists, especially with the role that grandmother Lois takes on, but at the latest when the demon comes to full speed, the weaknesses of the content are quickly forgotten.

Sure: until the time comes, again not much really happens in Paranormal Activity 3. Fans have to be satisfied with some arguably long-winded dialogue scenes until it finally gets really exciting. But since especially the child actors deliver very good performances and the two directors continuously tighten the tension screw, in the end it can be said with justification: this sequel is also absolutely successful and therefore also for fans more than worth seeing! We can only hope that a very likely fourth part will bring more answers and that the story won't get lost in even more questions and contradictions. Because that would truly not do justice to this so far very effective horror series. Worth seeing