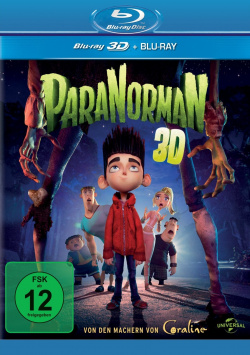 Film: For most children it would be bad enough if they were harassed at school by their siblings and misunderstood by their parents. 11-year-old Norman would be happy if those were his only problems. Because Norman has a very special gift that could put the horror film fan in great danger: the outsider can talk to the dead. And although he has been able to gain a lot of positive things from this gift so far, for example that he can still spend time with his deceased grandmother, he is in real trouble when one day his small hometown is haunted by zombies. This resurrection of the dead is part of a centuries-old witch curse that could destroy the whole city. Only Norman could stop this thanks to his gift. But how can an eleven-year-old take on zombies, witches and a panicked mob?

With "ParaNorman" Sam Fell and Chris Butler present a very special Stop-Motion-Trickfilm. With a team that has gained experience working on films such as "Corpse Bride" or "Coraline" on dark and humorous animated films, the two directors have conjured up one of the most original and endearing animated films of the year. As a homage to old horror films, peppered with numerous genre recitations, the film works just as well as an entertaining fantasy adventure and a lovable coming-of-age story. With a sympathetic anti-hero, who due to his gift appears rather shy and reserved towards living people, but of course grows beyond himself at the decisive moment, and wonderfully weird side characters, the story quickly succeeds in conquering the hearts of the audience.

However, "ParaNorman" in many respects eludes the common pattern of contemporary animated films. For example, there are pleasingly few of the nowadays unfortunately obligatory Ahhhh screams of the protagonists accompanied by chase, fall or slide scenes. Also the optics seems to be unusual with the unattractive figures and the partly very unshapely appearance of objects and characters and certainly needs getting used to. In addition, the film is aimed at a much more limited target group than the "Ice Age" films and other family jokes animated on the computer. "ParaNorman" appeals to young viewers from the age of 10 who are young at heart and have a weakness for the creepy and the macabre. Because the animated film has a lot to offer. Although these moments are presented in a very funny way, delicately stringed children might have to deal with fear in some scenes, though.

However, "ParaNorman" is not a pure children's film anyway. A few small hidden gags, that are clearly only built in for adults, and the many wonderful details, that many younger viewers don't get to know due to a lack of cinematic prior knowledge, make the movie a real pleasure even for older genre fans. And so it may well happen that the adult companions have much more fun with the animated film, while hectic animation adventures might even bore children used to the story, which was just very quietly told at the beginning.

Who has loved scary movies and horror stories as a child, who was an outsider himself or simply likes weird fantasy stories in the style of "Coraline" - whereby the humor of "ParaNorman" is far more suitable for the masses than the wonderful, but nevertheless very bizarre "Coraline" - it shouldn't miss this lovingly designed, funny and original scary trick film. Absolutely worth seeing!

Picture + Sound: The film is available at Blu-Ray in both 3D and 2D versions. Only the 2D version was tested. The picture of the Blu-Ray inspires with an extremely high richness of detail, a wide color palette and outstanding contrasts, that even in dark moments make sure that the viewer doesn't miss any of the loving details of the movie. The sound is on a similarly good level and convinces with harmoniously implemented dialogues and targeted sound effects, through which the very special atmosphere of the film is captured excellently in the audio area as well. Very good.

Extras: Unlike the DVD, the Blu-Ray has some very good extras u offer. We start with an audio commentary by author/director Chris Butler and co-director Sam Fell. Both of them have a very stimulating, enthusiastic conversation, which shows again and again that the creators have worked on this project with a lot of love. An interesting and entertaining commentary, which unfortunately has no subtitles.

We continue with a look at three early animation sequences (approx. 9 min.), which are also available with optional comments (without subtitles). But the heart of the bonus material is the nine-part look behind the scenes (approx. 40 min.), which provides a very good insight into the production, from the research trip through New England to the construction of the sets and post-production. Seven further short documentations (approx. 15 min.) complete the Making of in a somewhat superficial but nevertheless worth seeing way.

Fazit: "ParaNorman" is a lovingly bizarre animated film, which stands out in a pleasant way from many more mass-suited animated films and can appeal to both younger and older horror and animated film fans. The film's 3D/2D Blu-Ray is technically first-class and also has some very interesting extras to offer. Even if the characters' look and the dark story won't suit the taste of a wider audience, this disc is still a must for everyone who likes it more unusual and weird!