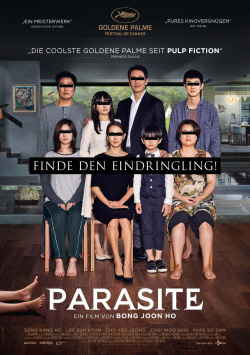 The Kim family lives a life at the bottom of the subsistence level. The apartment shared by father, mother, son and daughter is a greenish dim basement, the neighbors' wi-fi is only available in the far corner of the bathroom, and jobs like folding pizza boxes keep the family just barely afloat. But then, through an encounter with an old buddy, the son gets a once-in-a-lifetime opportunity: a job as an English tutor in the Park family's swanky mansion. He barely knows any English, but he manages to convince his new student's parents otherwise. And that's not all. With clever manipulations and lies, he gradually manages to get the rest of his family hired by the Parkers and get rid of their previous servants. Unaware that their new employees are related, the wealthy Parkers can no longer do without the Kims. But then a long-kept secret triggers unexpected events that could cause the house of cards of ingenious deceptions they've so carefully built to collapse again.

For his latest work, Parasite, acclaimed Korean director Bong Joon Ho (Snowpiercer, The Host) picked up the Palme d'Or at Cannes and several Oscars this year. But his blend of bitter satire, drama, deep black comedy and gripping thriller is also truly brilliantly told. The film constantly reveals new abysses and at the same time eludes any clear classification. In essence, Bong Joon Ho has created a very intelligent and at the same time extremely entertaining piece of social criticism that comes up with surprising twists and turns and a fascinating visual language. But what makes Parasite so special in the end is that it works extremely subtly with very clear language, so that you as a viewer are surprised again and again by how quickly the story changes its tone or direction - and in the end still arrives coherently at the predetermined destination.

Films like this usually come across as very pregnant with meaning and heavy. That's because for many filmmakers, entertainment and ambition seem to be categorically mutually exclusive. Bong Joon Ho shows, as he has in previous films, that this is not so. Even in moments where he shows the misery his protagonists live in, he allows his audience to discover something like lightness and humor. And he shows that it's possible to address problems in our society without having to wag his index finger all the time or bathe excessively in gloom.

In short, Bong Joon Ho trusts that his audience can sit back and be entertained without completely turning off their brains. You get his message, you get jolted by some intense scenes and you also think about the film for a long time. All this definitely makes Parasite a small masterpiece that more than deserves not only its numerous awards like the Oscar, but also an Absolutely Worth Seeing!

Cinema trailer for the movie "Parasite (Südkorea 2019)"
Loading the player ...