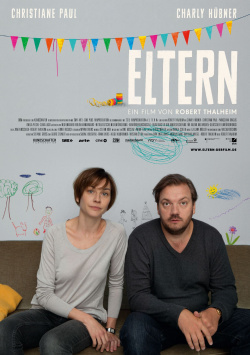 Christine (Christiane Paul) and Konrad (Charly Hübner) had actually planned everything perfectly: while she takes care of the young family financially as an aspiring senior physician, he takes some time off from work to be there entirely for their mutual daughters Käthe (Paraschiva Dragus) and Emma (Emilia Pieske). This only goes well for so long, however, until Konrad receives an offer to return to work as a theater director. It's a great opportunity, and perhaps his last, that he can't pass up. But although with the young Argentinean Isabel (Clara Lago) an au pair is quickly found to take care of the girls while their parents are at work, the double role as father and director soon proves to be a real test for Konrad, especially since some of his actors act more childish and bitchy than his daughters. Moreover, Isabel is not the help the couple expected either. The pressure on the family and on the relationship between Christine and Konrad grows with each passing day, until dad can't take it anymore and takes time off from his family. A decision with far-reaching consequences.

As he did with Am Ende kommen Touristen and Westwind, filmmaker Robert Thalheim once again strikes a successful balance in his latest directorial effort Eltern between reality-based drama and quiet comedy, between seriousness and a bit of loosening lightness. The decision to set the story at a point where the protagonists have long since (seemingly) settled into their role as parents is particularly commendable. This is because it allows Thalheim to bypass all the utterly hackneyed clichés that young, perpetually overwhelmed movie fathers otherwise have to contend with. Instead, he is able to focus on a very understandable problem for many parents: the return to work after a longer parental leave and the reconciliation of work and family.

Even at the beginning this is quite amusing to watch, especially since Charly Hübner as Konrad embodies a true dream father. Hübner makes clear in a rather subtle but absolutely comprehensible way that this role does not fill him completely despite all the joy his daughters give him and that he still dreams of the really big success as a theatre director. The interplay between him and Christiane Paul seems very harmonious, which makes them very believable as a well-rehearsed couple. But the play of the two becomes really strong when they move apart as a film couple and each has to go his own way.

Here Christiane Paul delivers some very strong moments when she has to understand that her professional success has led to an estrangement with her ten-year-old daughter Käthe. The way Christine desperately fights to get closer to her daughter again in order to give her the support she desperately needs in the face of the family crisis is really very convincingly played. And also the two wonderful child actors deliver really great acting cinema.

What stands in the way of a completely positive overall impression is on the one hand the plot line around the au pair girl Isabel. This part of the story seems a bit too contrived and gets in the way of the realism of the rest of the production a bit. On the other hand in Parents it should be noted that as a SWR/arte cooperation it has a very strong TV movie character. That certainly doesn't make it a worse film, because Eltern is far from that. The only question is whether you really need to have seen this work on the big screen, or whether a future TV broadcast or DVD release might not give it the same intensity, which is much more beneficial to the viewer. Still, there's no question that for lovers of sophisticated German family dramas, Eltern is a strongly acted, very well directed and absolutely watchable film with only minor flaws.

Cinema trailer for the movie "Parents (Deutschland 2013)"
Loading the player ...