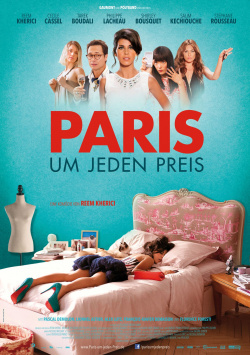 Paris at any price

The fact that Maya (Reem Kherici) actually comes from a small Moroccan village is so not noticeable to the Fashonista living in Paris, when she makes the glamorous nightlife of the metropolis unsafe with her friends. Luxury and her job with famous fashion designer Nicolas (St&eacute;phane Rousseau) are the most important things in Maya's life. With the prospect of a permanent job as a designer, she has almost reached the goal of her dreams. But then a simple traffic stop threatens to ruin everything. Because as it turns out, Maya's residence permit has expired and since she doesn't have a permanent job yet, she is immediately deported to Morocco. Here, she not only has to deal with her disappointed father and long-forgotten traditions. She must also try to design the perfect dress from her small hometown that will get her the job she's dreamed of, and with it, her return to Paris. But in a place where Maya now feels so incredibly foreign, is it even possible to find the inspiration she needs?

Paris at Any Price is a comedy about rediscovering one's roots, the clash of different cultures and the fierce competition in the world of fashion. Director Reem Kherici, who has written herself the lead role, plays with countless clichés, which she embeds in an almost fairytale-like story. It's very funny at times and nice to watch throughout. But more than a charming little film that really hurts no one, Paris at Any Price has unfortunately not become.

This is primarily because Kherici gives away too much of the possible potential of her story. Instead of satirical bite, which can be felt in a few scenes, she too often relies on over-the-top claptrap and overly one-dimensional characters. The brief flashes of spot-on irony and clever dialogue are repeatedly overshadowed by shallow gags and overly predictable plot elements. True, this is only really annoying on the rarer occasions. Still, the shallow moments take away much of the comedy's charm, which can definitely be felt here and there.

If Kherici had been a little more subtle with some of the gags and in drawing some of the supporting characters, and used more bite in other aspects in return, Paris could have been a quite wonderful multi-culti tale at any cost. But as it is, the whole thing is just easily digestible entertainment for on the side, which is quickly forgotten again. For a nice girls' night out at the cinema it's certainly enough and that's why, with a few cutbacks at the end, it just about gets a: Worth seeing!

Cinema trailer for the movie "Paris at any price (Frankreich 2013)"
Loading the player ...