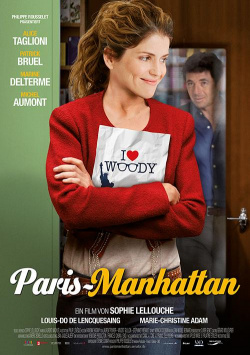 It's always good to have someone in your life you can turn to with confidence for all your problems and in every crisis, someone who can give you support and good advice. Alice (Alice Taglioni), an attractive pharmacist in her mid-30s, also has such a confidant, which is very helpful especially with regard to her problems with men. It's just too bad that this confidant is merely a poster of Woody Allen, and that the legendary filmmaker only gives her his helping life advice in her head. And when Alice meets the charming Victor (Patrick Bruel) and he is so not interested in a love affair with Alice, even an imaginary Woody Allen can't help her anymore. And so her dream of simply being conquered romantically doesn't seem to come true this time either...

With Paris Manhattan, Sophie Lellouche delivers a relaxed romantic comedy that also functions as an affectionate homage to Woody Allen. The imaginary dialogue between Alice and her seemingly soulmate urban neurotic is quite wonderfully written and reveals the young filmmaker's great admiration for the cult director. Certainly, the cleverness of the dialogues can't compete with classics like Manhattan and the humor sometimes seems a bit too forced to be in the same league as Woody Allen. However, that's not too bad. Because it's obvious how much love Lellouche has for the cinema and the movies of Woody Allen. And that love translates into very engaging charm, which the comedy can definitely benefit from, even in its slightly weaker moments.

Another plus is the cast. Alice Taglioni (On the Run) gives the relationship-disordered pharmacist, who sometimes prescribes a movie instead of medication, in a way that makes her neuroses seem ravishing and not exhausting. And Patrick Bruel, who last appealed in The First Name with a sly performance, also gives the not-at-all-romantic charmer a very likeable performance. There's chemistry between the two, which is also where the film, which clocks in at a very tight 77 minutes, gets its very special sparkle.

Although the word nice has become more of an insult than a compliment in the vernacular, it best describes this film - not, of course, in its kinship relationship with the arguably negative excrement of which it is supposedly the little sister. Paris Manhattan is amusing, but the really big laughs are absent. The film is romantic, but the really big feelings don't want to happen either. There are some wonderful ideas, but they alone aren't enough to carry an entire movie. The end result is well crafted, is enjoyable to watch and really makes you feel good at the end. However, it lacks something lasting, something that makes this film special and turns nice into magical. But considering that this is a feature debut, any possible negative connotation falls away from the nice and in the end all that remains is a well-deserved: worth seeing!