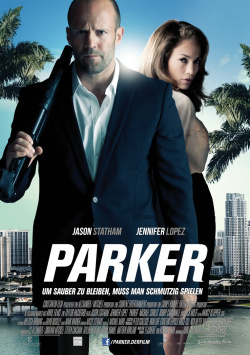 A full 24 novels centering on career criminal Parker were published by bestselling author Donald E. Westlake under the pseudonym Richard Stark from 1962 until his death in 2008. The character of Parker quickly became very popular with fans, and some of the novels have also served as the basis for motion pictures, such as the Mel Gibson thriller Payback. But the character of the professional criminal has not yet made it into the cinemas under the name Parker. Only now, almost fifty years after the publication of the first Parker novel, Taylor Hackford (Ray) has brought the charismatic crook to the screen.

Based on the 2000 novel Someday Everyone Gives Up (OT: Flashfire), Parker tells of a robbery planned ingeniously in itself, which has drastic consequences for the loner Parker (Jason Statham). For Melander (Michael Chiklis), the leader of the squad with which Parker pulled off the heist, wants to blast his new partner to kingdom come while he's still on the run. Too bad Parker survives and swears revenge. He follows the gang's trail to Palm Beach, where the men are clearly planning another score. And Parker wants to ruin it for them. To spy on the crooks' plans, Parker poses as a wealthy Texan looking for a new place to live. The indebted real estate agent Leslie Rodgers (Jennifer Lopez) is to find him a suitable mansion. But Leslie quickly catches on to Parker's scam and tries to make common cause with him. But this turns out to be a very dangerous idea, especially since a professional killer is on Parker's heels.

In itself, Jason Statham is predestined for a role like that of the cool loner Parker. And the whole thing starts off very promisingly. The robbery of a central cash register during a big fair is entertaining, exciting and also quite cleverly staged. And also the following fight between Parker and his accomplices in the getaway car is worth watching. After that, however, the staging falls back into an ordinariness that not only robs the film of a lot of tension, but also makes it extremely interchangeable in many moments.

When Statham gets to prove himself as an action star, the thriller always works really well. Especially the hard-hitting duel with a crazed killer in Parker's hotel room is a real suspense highlight. And also the coup that is supposed to take place in Palm Beach is undoubtedly one of the positive aspects of the movie. But especially the moments in which Jennifer Lopez is in the center of the action just don't want to fit coherently into the overall picture. Her entire storyline feels like completely unnecessary baggage that noticeably drags down the entertainment value of the film. This isn't to attack the acting talent of Jennifer Lopez. Granted, she's done much better in other films, but she's also done much worse. It's simply the way her character is written that doesn't fit. The character of Leslie doesn't really add anything significant to the story, and thus proves to be more of a spoiler that makes for unnecessary lengths and robs the thriller of a lot of tension.

Sure, there are one or two scenes between Parker and Leslie that are quite amusing. But still, in the end, you're left with the feeling that the film could have been much better and more fast-paced without this character. So Parker isn't a bad movie, but it's just too ordinary to stand out from the mass of similar genre works. And the whole thing can't live up to the expectations of a real Parker movie after all these years. If you like light rogue thrillers with some action and a little bit of humor and are also a fan of Jason Statham, you will surely be entertained here. But if you're hoping for clever suspense and fast-paced action, any illusion of an enjoyable evening at the movies will be quickly taken away after a very good beginning. Therefore: only with clear deductions still worth seeing!