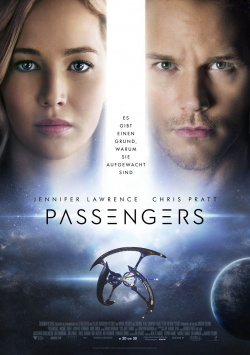 A large spaceship takes a large group of people from Earth to another planet they plan to colonize. The journey takes 120 years, most of which the crew and passengers spend in artificial deep sleep. But a few years after take-off, the ship is caught in a meteor shower, causing a short-term disruption of its systems. With fatal consequences for passenger Jim (Chris Pratt), whose sleep chamber opens ninety years too soon. Unable to put himself back into deep sleep, Jim is now doomed to a lonely life aboard the massive starship. His only interlocutor is a bar robot (Michael Sheen), but he's no real substitute for interpersonal contact. When Jim discovers Aurora's (Jennifer Lawrence) sleeping chamber after a year of loneliness and he falls in love with her videotapes, he makes a drastic decision, the consequences of which are long in coming.

As early as 2007, the screenplay for Passengers made it onto Hollywood's coveted Blacklist, where the best previously unfilmed screenplays are listed. Time and again the project was tackled, different actors like Keanu Reeves, Rachel McAdams or Emily Blunt and different directors were engaged, but the whole thing never went beyond the planning stage. It wasn't until Morten Tyldum (Headhunters) was chosen as director after the international success of The Imitation Game and two of Hollywood's hottest stars, Chris Pratt and Jennifer Lawrence, were brought on board that the repeatedly rejected project was finally realized. The only question is whether the long wait was worth it?

The answer is not really clear. It's more like yes. Because the film has very many strong elements, but also some clear weaknesses, which are especially prominent in the last third and are quite clearly attributable to the script. First of all, let's look at the positive aspects. First of all, there's the visuals. The set design is just great. It's fascinating to wander through the deserted spaceship with Jim at the beginning of the film. The visual effects are also convincing in many ways. For instance, there's a sequence where gravity fails on the ship just as Aurora is swimming in the pool. This sequence is really gripping and visually impressive.

So the film is definitely something for the eye - which of course also applies to its two main actors. In addition, it also has a bit of humor here and there, which pleasantly lightens up the otherwise not necessarily award-worthy dramaturgy. And then there is Michael Sheen as a cocktail mixing robot, who is without a doubt the acting highlight of the film. However, that's about as far as the positive aspects go. Sure, the story has some strengths. However, these are too often not adequately used, which is a real shame given the positive aspects mentioned.

Unfortunately, disappointing in parts are Chris Pratt and Jennifer Lawrence. The two play decently, no question. And there is a little bit of chemistry between the two. But it's not enough to carry a whole movie. This becomes obvious when Laurence Fishburne shows up and as a viewer you are very thankful for this change. Pratt and Lawrence are good actors and great likable characters. But this romantic space adventure is just out of their league - probably due in part to script weaknesses. They just don't manage to play credibly against the weak story, especially in the last part of the film, which makes the entertainment value of Passengers drop from very good to decent to finally weak after about 80 minutes.

For those who can live with a disappointing finale and for whom it is enough to see two attractive actors acting in a great set, this odyssey in space can definitely be recommended. If, on the other hand, you really want to be equally entertained from the first to the last second and for whom neither Chris Pratt nor Jennifer Lawrence are enough to compensate for any weaknesses, you'd better wait for the home cinema release - even if the great pictures don't work quite as well there, of course. Overall, there is therefore only with cutbacks still a satisfied: Worth seeing!

Cinema trailer for the movie "Passengers (USA 2016)"
Loading the player ...