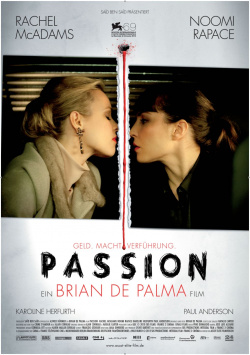 Isabelle (Noomi Rapace) sees her big chance to climb the corporate ladder at the Berlin advertising agency where she works under the charismatic Christine (Rachel McAdams) when her idea for a major ad campaign meets with widespread approval from the client and the board. But then Christine claims this success as her own, earning her a promotion to New York. At first, Isabelle is intimidated by Christine's charm and manipulative ways. But not least at the urging of her assistant Dani (Karoline Herfurth), she decides to turn the tables and beat her superior with her own weapons. The plan seems to work. But when the angry Christine discovers that Isabelle is having an affair with her former lover Dirk (Paul Anderson), a bitter battle between the women begins, which seems to leave its mark on Isabelle with humiliations of a particularly vile kind. But then the story takes a dramatic and extremely bloody turn.

With Passion, veteran director Brian de Palma (Scarface, Carrie) presents a remake of the French thriller Love Crime, the last directorial effort by filmmaker Alain Corneau, who died in 2010. De Palma spices up the original with his trademark stylistic devices like split-screen scenes, some sultry eroticism, and the blurring of the lines between dreams and reality. The director was able to convince with such elements in 2002 with the cleverly constructed thriller Femme Fatale. But here de Palma's formerly very effective and grand style just doesn't want to work anymore. Instead of suspense and fascination, the viewer is left with boredom, involuntary comedy and moments of acute embarrassment.

The thriller, shot mostly in Germany, begins with a strangely stilted opening sequence that immediately makes it clear that the inherently talented Rachel McAdams is completely miscast for this role. And even Noomi Rapace, known for her great performance in the Millennium trilogy, stands out here more for inappropriate overacting than subtle acting. As if that weren't enough, most of the changes de Palma made for his version of the story simply don't work. For instance, his portrayal of Isabelle's assistant as secretly in love with her boss in order to replace the very subtle ending of the original with a truly laughably striking finale not only robs the film of much of its potential intensity. Some scenes just come across as one embarrassing old man fantasy that shows nothing of the greatness of Brian de Palma's earlier work.

Also, the split-screen sequence in which a horrific dance performance is juxtaposed with a not-really-scary murder is not effective, but similarly laughable as Apple's really audacious product placement. Sure, Corneau's film has had its flaws too, but compared to this utterly screwed up remake, the original was a masterpiece of suspense and subtlety. None of this would be a big deal if it weren't for the fact that such an accomplished and once-great director was pulling the strings. That a suspense master like Brian de Palma, in particular, fails to pull anything close to watchability out of a decent story and talented cast is just sad. A few beautiful pictures and a handful of successful moments don't help much to pull the cart out of the mud. And so it can only be said with a heavy heart that Passion is already one of the biggest disappointments in an already rather weak year in cinema. Even for big fans of the director only very, very conditionally worth seeing!

Cinema trailer for the movie "Passion (Deutschland/Frankreich 2012)"
Loading the player ...