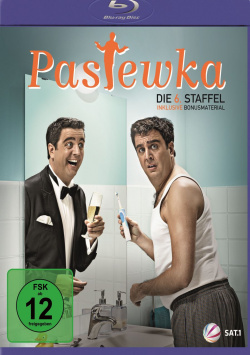 Content: Big changes are coming in the house Pastewka. After Bastian has finally got round to proposing to his girlfriend Anne (Sonsee Neu), it now goes with great strides towards a shared future. The first stop is the move to a new apartment in Cologne's celebrity district Marienburg. Hagen (Matthias Matschke), who will miss the closeness to his brother - in contrast to his girlfriend Svenja Bruck (Bettina Lamprecht), Bastian's nemesis. But as luck would have it, the position of caretaker, including a nice ground floor apartment, becomes available in the new house after only a few days. And that's when Hagen of course jumps at the chance. And so the family quarrels continue. Whether it's a magnet attached to the electricity meter, a nasty gastrointestinal virus that Bastian wants to protect himself from at all costs because of an upcoming reading with Christoph Waltz, or an involuntary trip into the wilderness with father Volker (Dietrich Hollinderbäumer), the family keeps causing a lot of turmoil in the already chaotic lives of Bastian and Anne. But also professionally Bastian stands with his oversized ego again and again in his own way and at some point Anne has to ask herself whether this man is really ready to be able to take on the responsibility that comes with marriage.

It is nice that Pastewka has not lost his bite and often very self-deprecating wit in the sixth season. Thereby wonderful dialogue jokes and classic slapstick alternate with nice regularity. And even if not every gag is right and some punchlines fizzle out in the void, the humorous hit rate is still very high overall. There is hardly any other actor/comedian who can make fun of himself as wonderfully as Bastian Pastewka. But also some of his colleagues prove here in not always sympathetic guest roles real greatness. Particularly noteworthy is that of Roger Willemsen in the episode Der Parkausweis, in which he is allowed to show himself from a particularly sleazy side. Especially in this episode it becomes clear what the quality of the series is. Although the big closing punchline is foreseeable from about the middle of the episode, it works really well, because the way to it is just right. The gags are so well built on each other and tied together that they still work even if you already know the episode or can just predict what punchline is being worked towards.

Whether Bastian tries to delete a drunkenly written text message to Anne on her cell phone, whether he wants to expose a masseur of fraud or whether he tries to become a YouTube sensation like his colleague Michael Kessler, the blunders into which the eternal complainer and know-it-all steps on his private, professional or family paths are always good for many laughs. Fans of the series who have remained loyal to Bastian, Anne, Hagen and Mrs. Bruck so far should not miss this very successful sixth season, which is once again peppered with allusions from film and television. And the final scene, a little homage to Christopher Nolan's Inception, is already whetting the appetite for Season 7, which hopefully won't be too long in coming.

Image + Sound: For the first time, the series has also been released on Blu-ray. The only real advantage over DVD: you can watch all the episodes in one piece without having to change discs. The picture and sound quality, which is also already on the DVD on a good level, is on the Blu-Ray, however, only imperceptibly better, which may be due to the fact that here on a disc the complete material of three DVDs is included. Overall, the technical realization pleases due to the clean picture, the decent overall sharpness and the coherent color scheme, as well as the well-mixed dialogue that dominates the tonal events. Good.

Extras: The disc has plenty of nice extras to offer. Starting off with four extremely amusing video commentaries, Pastewka is assisted by director Erik Haffner and writer Chris Geletneky. The three talk in a very relaxed atmosphere about the filming, about their own experiences that have gone into the stories, about the good old VHS tapes and even about the film Mr. Boogie with ex-Big Brother star Zlatko, which has only been seen by a handful of unfortunate people. In the episode Die SMS the three get a visit from Hugo Egon Balder, which increases the already high entertainment value of the commentaries a bit more. Absolutely recommendable for Pastewka fans.

Continues with a Making of (approx. 20 min.) to the double episode Der Trip, as well as 8 minutes of quite amusing outtakes and a few flap scenes (approx. 3 min.), which are shown accompanied by the music The Typewriter - made legendary by Jerry Lewis. Those who have followed the ten episodes of the sixth season attentively can then take the Pastewka quiz, at the end of which there is a small Easter Egg (approx. 1:30 min.) to see after correctly answering all the questions.

There is also an appearance of Wolfgang and Annelise alias Bastian Pastewka and Anke Engelke on TV Total, a sketch from the special Happy Spring, as well as the promotional trailer for the Wolfgang & Annelise book Our Beautiful Germany to see. And of course Ottmar Zittlau must not be missing, who amuses in two clips from the weekly show (each approx. 3 min.).

Conclusion: The sixth season of Pastewka again offers some extremely amusing moments, which are presented with the usual bite and self-irony. Especially the episodes Die Lesung, Der Parkausweis with a wonderfully greasy Roger Willemsen and the double episode Der Trip provide extremely good humor and show that from the concept of the series is still far from the air out. The decent technical implementation and the very entertaining bonus material make this Blu-Ray then also for fans of the series: absolutely recommendable!