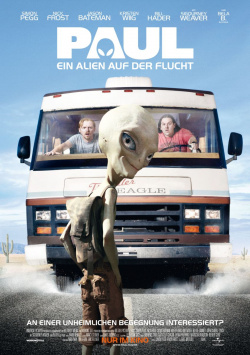 Paul - An Alien on the Run

The dream team from Shaun of the Dead and Hot Fuzz, Simon Pegg and Nick Frost, is back! Directed by Greg Mottola (Superbad), after their affectionate parodies of the horror and action genres, the two now deliver Paul, a homage to the science fiction film of the 80s peppered with countless quotes, paying particular homage to the work of Steven Spielberg.

Best friends Greame Willy (Simon Pegg) and Clive Collings (Nick Frost) travel from their native England to America to attend the mecca of all comic book geeks, Comic-Con in San Diego. They want to combine the trip with a trip to all the important UFO locations in the U.S., including of course the legendary Area 51. But even though the two friends read and see everything that has to do with aliens, they are not surprised when suddenly a real alien, who calls himself Paul (voiced by Bela B.), stands in front of them and asks them to take him with them in their RV. Because after being hidden by the government for 60 years, Paul finally wants to go home. After the initial shock wears off, Greame and Clive pick up the little gray alien with the crude snout and, pursued by the FBI, make their way to the point where Paul wants to meet up with his mothership. But even though the circumstances are more than strange, the two comic book junkies have no idea what proportions this adventure is about to take.

Paul is a wonderful blend of English and American humor, spiced with countless references to science fiction classics like E.T., Alien, Starman, and The Close Encounters of the Third Kind. The dialogue may be a bit raunchy at times and many a gag falls flat before it even enters the atmosphere. Still, on balance, the alien fun written by Simon Pegg and Nick Frost can be called absolutely successful. The perfectly animated Paul quickly wins the hearts of viewers despite the many expletives and discussions of sexual organs. The same goes for Greame and Clive, who work perfectly as anti-heroes. It's especially nice to see Simon Pegg and Nick Frost swap roles from their past films here. This time around, it's more Frost, as a man of reason, who saves Pegg, a lovable jerk, from all sorts of foolishness.

But the many supporting actors, most notably Jason Bateman as an FBI agent determined to do anything, and Kirsten Wiig as a devoutly religious Ruth, who discovers swearing and other sinful things through her encounter with Paul, also fit in very well with the tumultuous proceedings. The only criticism that both the script and Mottola's staging have to face is that Paul comes across as a bit cluttered at times. On the one hand, it's very nice that the makers have put together so many nice ideas, like the reasoning for why aliens always look the same in movies or how a certain star director came up with the idea for one of his biggest hits. Even the brief appearance and grand exit of an alien-turned-actress, is just great. But other scenes just don't work as well and add little to the actual story.

However, with the high percentage of really good laughs, a few minor hang-ups really don't bother much. Paul is a film by sci-fi fans for sci-fi fans, an endearing comedy that skillfully plays with clichés of the genre, making fun of them without exposing them to ridicule. With a really successful dubbing and many charming as well as quirky characters, only one possible conclusion remains in the end: Paul is just galactically good! Absolutely recommendable!