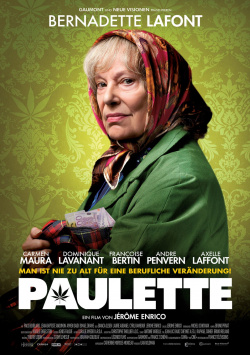 Those were the days when Paulette (Bernadette Lafont) lived a happy life with her husband and her little pastry shop. Now, at 80, she has to keep her head above water on a mini-retirement in an extremely seedy suburb of Paris. She has an extremely strained relationship with her daughter Agnes and is reluctant to look after her little grandson Leo. For Paulette blames the foreigners first and foremost for her misery. Not only do they snatch away all the jobs and are all criminals anyway. Now Osman, a policeman of African descent, has taken her only daughter. Paulette knows that she has nothing more to expect from the world and that she has to take her luck into her own hands. And that's exactly what she decides to do when one day, by a lucky chance, a packet of marijuana falls into her lap. From now on, the gruff pensioner improves her pension as a hashish dealer for the crook Vito. When she has to cut her remaining dope after an unfortunate run-in with other dealers on the block, Paulette discovers her talent for baking truly intoxicating delicacies. And before she knows it, she's risen to become the drug queen of her neighborhood - a career that, of course, can't be kept secret for long.

With Paulette, director J&eacute;rome Enrico has delivered a highly entertaining contribution to the discussion of unfortunately very commonplace big-city problems such as poverty among the elderly, migration and drug-related crime. Without trivializing these problems he manages to find a humorous side to them, which makes the film a biting social satire in its best moments. When Paulette really gives vent to her anger and her very blatant prejudices, there is not a dry eye in the house due to the blunt political incorrectness. Yet, Paulette doesn't come across as a mindless racist. Through the opening sequence, which reveals a small glimpse into her past life, it becomes understandable why she is so angry - and somewhere that anger has to be discharged.

Despite some rather dark moments, Enrico manages perfectly to ensure that the viewer is not dragged down by the underlying dreariness of his story. Loveable quirky characters such as the trio of ladies who help Paulette bake her delicious trips, or even a bit of over-the-top situational comedy, always pleasantly lighten up the proceedings. It's true that here and there you get the feeling that the staging overshoots the mark a bit and the very amusing basic idea is diluted a bit. But the bottom line is that the story, inspired by a little article Enrico read in the newspaper, is a lot of fun.

So overall, Paulette offers very charming and nice entertainment. For more, the comedy unfortunately lacks the necessary bite in the crucial moments, which still distinguishes the comedy especially at the beginning. At the end the social satire turns into a modern fairy tale, which makes good mood, but after the wonderfully vicious beginning it comes across a bit too well-behaved. Still, if you like French comedies that have their heart in the right place and know perfectly how to convey their very good and important message in an amusing and entertaining way, this dealing granny can definitely be recommended to you. With a deep bow to the great leading actress Bernadette Lafont there is therefore also a deserved: Worth seeing!

Cinema trailer for the movie "Paulette (Frankreich 2012)"
Loading the player ...