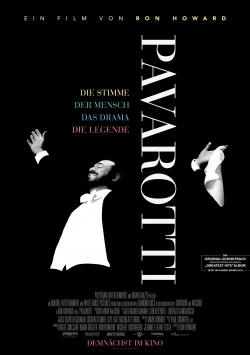 He was an exceptional artist, a great singer and a charismatic entertainer: Luciano Pavarotti (1935 - 2007) managed to make opera accessible to a wide audience. He lured people into the opera houses of the world and managed, with Jos&eacute; Carreras and Pl&aacute;cido Domingo as The Three Tenors, to sell more records and concert tickets than many a major pop star. The combination of his unique voice and his very special charisma ensured that people fell at his feet - especially women.

Twelve years after the death of this great artist, director Ron Howard dedicates Pavarotti, a very watchable documentary, to him. Howard, who has already proven with his documentary about the Beatles how stirring such cinematic memorials can be, has again collected masses of archive material, private recordings and recordings of performances for this documentary and also lets companions and family members have their say.

Of course, one can find fault with the fact that a film like Pavarotti does not exactly deal critically with the portrayed artist. The film is a puff piece, one should be clear about that. The fact that Luciano Pavarotti was no saint is hinted at, but not elaborated on. But it doesn't have to be. After all, Howard's aim is to show what made Pavarotti so special as an artist and as a person and why he made so many people so infinitely happy with his voice. And he does that very, very well with this portrait, some of which is very intimate and also fascinating!

You don't have to love opera to like Pavarotti. If you have a soft spot for rousing artist biographies and don't mind if they're presented in a somewhat one-sided way, this documentary is not to be missed. Worth seeing!

Cinema trailer for the movie "Pavarotti (USA/Großbritannien 2019)"
Loading the player ...