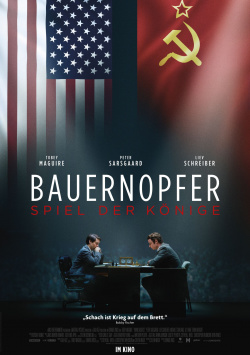 In 1972 the Cold War was still in full swing and neither the USA, nor Russia missed an opportunity to demonstrate their strength and prove their patriotism. So it suited governments and the media just fine that with the American Bobby Fischer (Tobey Maguire) the youngest chess grandmaster in history would compete against the reigning world champion, the Russian Boris Spasski (Liev Schreiber). 21 games were played in Iceland between the two chess geniuses. But Fischer's greatest battle was with his inner demons, which kept him constantly sliding between genius and madness, and which nearly derailed the important tournament more than once.

With Pawn Sacrifice - Game of Kings Edward Zwick has managed the feat of directing a film about one of the most important chess tournaments ever that is extremely stirring even if you have no idea whatsoever about chess. In order to make the scenes in which the chess tournament is in the center of attention comprehensible even for laymen, Zwick uses some good visual tricks. In addition, these moments are enhanced in their authenticity by the perfect insertion of archival footage, even if Zwick has certainly taken dramaturgical liberties with some details. All of this makes the film a stirring period piece about the effects of the Cold War and the great importance of this tournament.

But basically this is only the frame story of the drama. For this is primarily about the battles Bobby Fischer had to fight with himself beyond the chessboard. The fact that this is so excellently done is primarily due to the truly outstanding acting of Toby Maguire, which at times comes across as extremely powerful, but at other moments is no less intense just limited to small nuances. Maguire portrays Fischer as a genius mind who liked to appear eccentric or arrogant on the outside. Inside him, however, a constant battle raged between his genius mind and his delusions of persecution and perfectionism bordering on insanity. That Maguire manages to express all of this in some moments through only his facial expressions is absolutely impressive. But the real art is that the performances of his co-stars are not eclipsed by this intense acting. Because Liev Schreiber or Peter Sarsgaard are also on top form here and Maguire gives them enough space to be allowed to show it.

Pawn Sacrifice - Game of Kings can therefore convince on several levels: dramaturgically as a gripping psychogram, as a biopic and as a highly interesting contemporary document, technically as atmospherically tightly staged actor cinema. Even if there are a few small lengths and the film is hardly something for the general public, it can be hoped that it is not completely lost in the mass of new releases that flood the smaller art house cinemas week after week. Because that would be a real shame, especially considering the strong performance of Tobey Maguire. Absolutely worth seeing