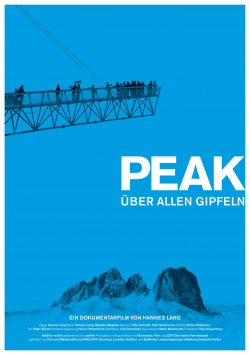 Peak - Above All Peaks

The mountains - most people associate this with nature, solitude, romance and silence. On the other hand, the mountains also stand for mass tourism, which is not exactly in harmony with nature, but for many people in the mountain regions has long since become a vital source of income. The discrepancy between a life in harmony with nature and high-tech ski tourism, between romantic silence and loud Apr&egrave;s ski parties, between simple agriculture and modern techniques against climate change Hannes Lang tries to capture in his visually stunning documentary Peak - Über allen Gipfeln.

To do this, Lang ran his cameras for a year in Sölden, the Ritz Valley, South Tyrol, Grindelwald and the Kaunertal Valley and captured some very impressive images, most of which he lets speak for themselves. It is true that a few inhabitants of the regions have their say here and there, to talk about life as a simple farmer, about the changes caused by climate change, about artificial snowmaking or about the necessity of tourism. But for long stretches, the sometimes more, sometimes less natural soundscape dominates the action. Lang uses an extremely effective stylistic device. He repeatedly directs the camera towards the picturesque nature, which is only filled with the rustling of the wind, birdsong or the ringing of cowbells, but otherwise with a fascinating silence. Only slowly do unnatural noises such as the engines of construction vehicles or the babble of tourists' voices intrude on the scenery.

The contrast is worked out particularly effectively in a sequence in which Lang visits a holiday settlement built into a mountainside with a number of not exactly attractive residential units only in summer, when hardly anyone lives there and the whole thing almost gives the impression of a ghost town. A little later, the camera wanders through the alleys of the settlement again, but now in winter, when the place is bustling with tourists crowding into the ski lifts or celebrating loud Apr&egrave;s ski parties.

The film has some very interesting moments to offer, showing the difficult relationship between industrialization of the Alps and the more secluded life in a threatened idyll, and also highlighting how people are trying to cope with the changes driven by themselves in order to be able to live off tourism for as long as possible. It's true that there are some scenes that are clearly long, which are underlined by the sometimes too extended, silent shots. But all in all Peak - Über allen Gipfeln is a fascinating, surprising and somehow also a bit worrying film, which can be recommended to all who are interested in the mountains and the discussions about climate change and mass tourism. Worth seeing

Cinema trailer for the movie "Peak - Above All Peaks (Deutschland/Italien 2011)"
Loading the player ...